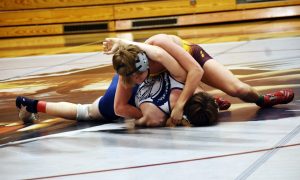 Photo by Eddy Gifford – Dade’s Zane Murdock dominated his foe from Gordon Lee on Thursday afternoon as he faced an old teammate. Murdock transferred to DCHS this year after attending Gordon Lee. The Trojans won the close match, but the improving Wolverines kept it close.

The Wolverines wrestled Ft. Payne first, and the Wildcats won the dual by a score of 49-30. Gideon Moore, Gavin Childress, Landon Williams, and Gabriel Yarbrough won their matches.

The second match of the evening was against Gordon Lee. Dade would wrestle much better against the Trojans, but they still fell short 42-36.

The difference in the match was an illegal slam call in the 144-pound match. Brandon Willerson was winning the match, but after slamming his opponent, his opponent was unable to continue, and the Gordon Lee wrestler won by forfeit. Anderson Windsor, Gideon Moore, Zane Murdock, and Landon Williams all won their matches.

“Gideon Moore continues to wrestle extremely well. He never quits, and I am excited about what he can accomplish this season. As a team, we have a long way to go. We are close, but we need to grow up in some spots,” Coach Jeff Poston said.