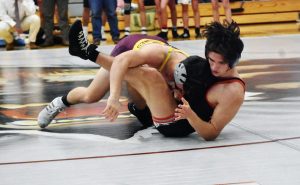 Photo by Eddy Gifford – A Wolverine wrestler gets a take down against Signal Mountain last week. The Wolverines had a busy week of action, picking up several wins and improving with each match.

The Dade County Wolverine Wrestling team had a busy week of competition last week. The Wolverines kicked off the action by traveling to Model High School for a quad match on Wednesday.

The third match of the evening was against Rome High School, and Dade would win that match up 66-12. Two great matches in that dual were Stanley’s win at 175 pounds and Yarbrough’s match at 285 pounds.

The final match Thursday evening was between Dade County and Chattooga County, with Dade winning convincingly 54-30.

“All in all, it was a good week. The kids are starting to fall into the correct weight classes, so that helps. We are still stacked up around 150 pounds, so we are rotating those guys in and out, but they should all make the correct weights after Christmas. If we can do that, then we should be able to compete for a post-season spot at the Area Duals, and that is our ultimate goal,” Coach Jeff Poston said.