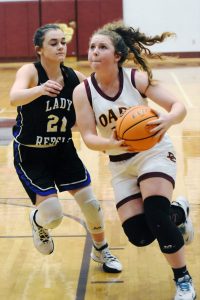 Dade got off to a really slow start as they scored only three first quarter points. The Lady Colts also started slow but managed 11 points and an eight-point lead after the first quarter of play.

While the action remained slow, Dade did manage nine second quarter points to eight for Coahulla Creek and at the end of the first half the Lady Wolverines trailed 19-12.

The second half started like the first for Dade who again managed just three points in eight minutes while the Lady Colts warmed up and scored 17 to increase their lead to 36-15.

The Lady Wolverines were scheduled to be back in action on Nov. 21 in the Ridgeland Tournament facing Signal Mountain at 4 p.m. and again on Tuesday against Ringgold, also at 4 p.m.

The Lady Wolverines will then get a break for Thanksgiving and be back on the court on Friday, Dec. 2 at 6 p.m., when they host the Pepperell Lady Dragons in the first region game of the season.

The Lady Wolverines had a pre-season scrimmage game against the LaFayette Lady Ramblers last week as well and lost 54-34. It was a six-point game heading into the fourth quarter when LaFayette outscored Dade 19-6.

Thompson led the scoring with 13 points while Adilynn Gross, Brooklyn Konrad, and Kaitlyn Stinnett had five-points each.