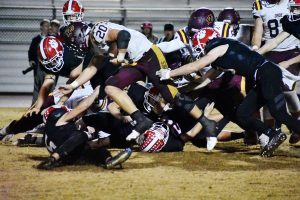 Photo by Eddy Gifford – The Wolverines’ Landon Williams bulls ahead for yardage against the Rabun County Wildcats Friday night in state playoff action. The Wolverines season came to an end 47-7 but played a much better game than the score indicated.

The three-and-a-half-hour trip on a rainy day turned out to be a good football night when the rain stopped around 5:00 and the temperature hovered around 60 degrees for the game.

Dade won the coin toss and elected to kick and get the ball to start the second half. The defense was ready for the challenge and held the Wildcats on their first possession, forcing a punt after three plays.

On the Wolverines second possession of the game, they drove the ball down field thanks in part to a 33-yard pass from Bryson Shrader to Demetrius Walker setting up a touchdown run of two yards by Zeke Wheeler and the Caroline Tremmier kick made it 7-0 Dade against the undefeated Wildcats.

Late in the first quarter, the Wolverines muffed a punt and Rabun recovered inside the Wolverine ten-yard line, but Dade’s defense rose to the occasion and forced a 30-yard field goal. The score was 7-3.

The Wildcats would take the lead early in the second quarter when they hit a long pass for a 46-yard touchdown. The extra point kick was good, and with 10:51 remaining in the first half, the score was 10-7 Rabun County.

On the Wildcats next possession, they scored again on a long pass, covering 32-yards. The extra point kick put them on top 17-1 with 5:07 remaining in the first half.

The second half would be Rabun. Their first score came with 6:49 remaining in the third quarter when they scored on a seven-yard pass and the extra point made it 24-7.

They would score again late in the third quarter on another pass play, this one for 35 yards, and the extra point put them up 31-7 with 2:49 remaining in the third.

Midway through the fourth quarter, Rabun intercepted a Wolverine pass and returned it 35–yards for a touchdown and with the extra point kick went up 38-7. 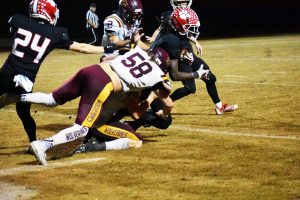 Photo by Eddy Gifford – Zach Counts makes the tackle against the Wildcats Friday night in state playoff action. The Wolverines ended the season with a 6-5 record and their second playoff spot in a row.

The Wolverines then gave them two points when a bad snap on a punt sailed over the punters head and out of the end zone for a safety to make it 40-7.

The final score of the game came late when the Wildcats ran in from seven yards out and the extra point kick made it 47-7.

Mistakes and turnovers hurt the Wolverines, as the game was much closer than the score indicated from a statistics standpoint. Dade had 211 yards of total offense to the Wildcats’ 217. The Wolverines also ran more plays, 59 to 50, but also had 15 penalties to 12 for the Wildcats. The big difference was four turnovers.

Shrader led Dade’s offense. He completed 10 of 21 passes for 106 yards and three interceptions. Braylon Sullivan had 12 carries for 46 yards while Landon Williams had eight carries for 42 yards. Wheeler had 13 carries for 28 yards, one touchdown, and four receptions for 46 yards. Walker had one reception for 33 yards that set up the Dade’s only score.

On defense, Williams led the way with seven tackles, seven solo, two sacks, and four tackles for loss; Sullivan had five tackles, five solo. Wheeler, Kade Pardue, and Ryker Stanley all had two tackles each, and Stanley also had one tackle for loss and one interception.

Congratulations are in order for the Wolverines and coaches for a job well done, finishing with a 6-5 record and making the playoffs for the second year in a row.

Best of luck to the graduating seniors. We look forward to seeing what the returning players will do next season.