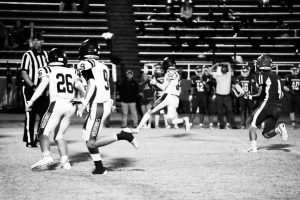 The Dade County High School football team traveled to Armuchee High School last Friday night needing a win to advance to the state playoffs. This was a winner take all game as the winner would advance and the loser’s season would be over.

Dade won the toss and elected to kick giving the Indians the ball first.

The Wolverine defense was up to the occasion and forced a punt by Armuchee. The Wolverines first possession had mixed results, picking up a couple of first downs but then had to punt the ball back to the Indians.

Zeke Wheeler’s punt went out of bounds at the one-yard line. The Wolverines quickly scored a safety when Landon Williams make the tackle in the end zone for the two–point play.

Armuchee then had to kick to the Wolverines and on the first play of the drive, Evan Koger ran around right end for a 43-yard touchdown. Caroline Tremmier’s kick was good, and the Wolverines had a quick 9-0 lead.

Early in the second quarter, Dade hit pay dirt again. This time, Wheeler broke free for a 66-yard touchdown run with 9:35 remaining in the first half. Abigail Tremmier’s kick was good, and the Wolverines were up 16-0.

On Dade’s next possession, Wheeler threw to a wide-open Demetrius Walker for a 30-yard touchdown with 7:04 remaining in the first half. The two-point conversion attempt was no good and the Wolverines were up 22-0.

Early in the second half, the Wolverines’ Kade Pardue intercepted an Indian’s pass and returned it for another touchdown. Caroline 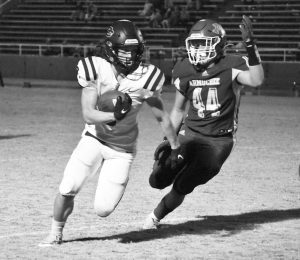 Photo by Eddy Gifford – Evan Koger had a big night for the Wolverines against the Armuchee Indians last Friday. Koger ran for one 121 yards on nine carries and a touchdown in the 43-7 win. The Wolverines finished the regular season with a 6-4 record, 3-3 in region play and now travel to Rabun County for the first round of the state playoffs.

On Dade’s next possession, Bryson Shrader threw a swing pass to Braylon Sullivan who turned it into an 87-yard touchdown, and the Caroline Tremmier kick put the Wolverines up 43-7 with 1:56 remaining in the third quarter.

With the big Wolverine lead, the fourth quarter was played with a running clock and no one scored. Dade picked up the win and advanced their season as the fourth seed from Region 7A.

Wheeler led the Wolverine offense with nine carries for 121 yards, scoring a touchdown and passing for touchdown.

Koger also had nine carries for 121 yards and a touchdown.

Braylon Sullivan had 4–1/2 tackles, four solo, one assist and a half tackle for loss; Walker had four tackles and four assists.

The Wolverines now advance to the state playoffs and will travel to Rabun County Friday. Game time is 7:30 p.m. This is the second year in a row the Wolverines have advanced to the playoffs.

Rabun County is the top seed from Region 8A and sport a 10-0 record.