The Dade County High School Wolverine football team hosted the Pepperell Dragons on Friday night in a game to determine the three seed in upcoming state playoffs. The winner was guaranteed third place while the loser must win this week’s game for the fourth-place spot. 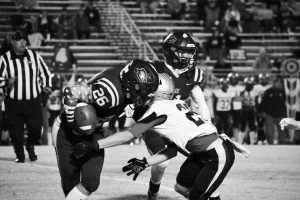 Photo by Eddy Gifford – The Wolverines Jax Guinn had a big night for the defense against the Pepperell Dragons Friday night. Here, he returns an interception and also had 8–1/2 tackles. The interception stopped an early Dragon drive, and the return gave the Wolverines good field position.

The Wolverines won the toss and elected to kick to the Dragons at the start of the game. Pepperell was forced to punt after their drive stalled.

Dade was unable to move the ball on their opening drive and punted the ball back to the Dragons.

With 2:28 remaining in the first quarter, Pepperell scored the first points of the game on a 2-yard run and the extra point put the on top 7-0.

The Wolverines then started a drive and moved the ball down field but on a quarterback keeper Brody Cooper was tackled near the Wolverine sideline and fractured his collarbone, forcing him out of the game and ending his season.

With the ball inside the 20-yard line Dade continued to drive the ball to the Dragon’s 1-yard line but fumbled the ball and Pepperell recovered to stop the Wolverines just short of the goal line.

The Wolverines took the second half kick and after three plays, had to punt the ball back to the Dragons as they tried to adjust to a new quarterback.

Pepperell scored their second touchdown of the night on their next series, a 60-yard run and with the extra point took a 17-0 lead. 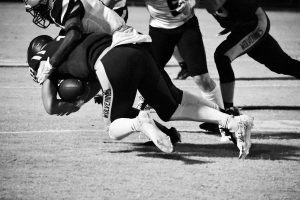 Photo by Eddy Gifford – Wolverine quarterback Brody Cooper’s final play of the season Friday night happened early in the game when on this play he suffered a broken collarbone. The run gave the Wolverines a first down inside the 20-yard line but ended his season. Dade later fumbled on the 1-yard line and Pepperell recovered ending the drive.

of the game on an 8-yard run. Caroline Tremmier kicked the extra point to cut the Dragons led 17-7 with 9:43 remaining in the third quarter.

On Dade’s next possession, a long run by Wheeler put them in great field possession inside the Dragon 10-yard line, but their defense rose to the occasion and stopped the Wolverines on fourth down at the 2-yard line.

Early in the fourth quarter, the Dragons added a 29-yard field goal to take a 20-7 lead with 11:10 remaining in the game.

From that point the defenses controlled play and the Dragons would walk away with a 20-7 win and the third seed in region, guaranteeing them a spot in the state playoffs.

The Wolverines final regular season game is Friday night at Armuchee with kickoff set for 7:30 p.m.

A win by the Wolverines will put them in the playoffs and a trip to Rabun County next week, while a loss will end their season.

Everyone make the trip to Armuchee and support the Wolverines as they look to bring home the win and advance to the playoffs!