The Dade County High School Wolverine football team traveled to Summerville last Friday to face the Chattooga Indians in a Region 7A game.

It was a big game for the Wolverines who are battling for a top four finish in the region and a spot in the state playoffs starting in three weeks. 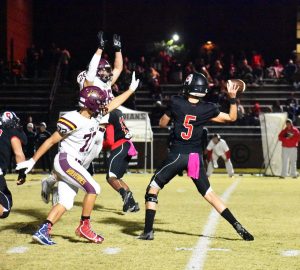 The Wolverines defense came up big against the Chattooga Indians Friday night in Region 7A play. Here the Wolverines pressure the Indian quarterback. The held the Indians to just 70-yards offense for the night in their big 33-0 win.

The Wolverines took the opening kick and drove the ball down the field, scoring their first points of the game early in the quarter on a 19-yard run by Zeke Wheeler. Caroline Tremmier’s kick was good, and the Wolverines led 7-0.

Early in the second quarter Dade scored again, this time on a 4-yard run by Brody Cooper to go up 13-0.

On the Wolverines’ next possession Braylon Sullivan got in on the scoring on a 7-yard run with Caroline Tremmier kicking the extra point to put them up 20-0.

Early in the third quarter DCHS put more points on the board, this time on a one yard run by Braylon Sullivan and the Abigail Tremmier kick put them on top 27-0.

Cooper would finish-off the Wolverine scoring late in the third quarter with a pass to Wheeler who ran 62 yards for the score to make it 33-0.

A running clock in the fourth quarter due to the mercy rule made for a quick ending and the Wolverines improved to 5-3 for the season 3-2 in region play good for a third-place tie with Pepperell – this week’s opponent at home this Friday.

The Pepperell game was changed earlier to Thursday but changed back last week to Friday. Kickoff is set for 7:30 p.m.

The Wolverine defense dominated the Indians, giving up just four first downs and 79 total yards in the game.

On offense Sullivan had another big night with 18 carries for 97-yards and two touchdowns while Cooper had 10 carries for 59 yards while passing for 151 yards. Wheeler had one reception for a 62-yard touchdown.

Friday’s game against the Pepperell Dragons will be a big one for the Wolverines. A win will give them third place in region and a spot in the state playoffs that would have Dade traveling to the second seed in Region 8A.

Everyone get out Friday and support the Wolverines as they look to make it two-in-a-row over the Dragons! Kickoff is at 7:30 p.m.