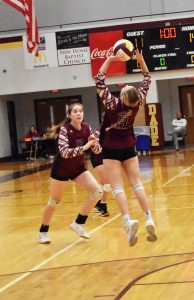 The Dade County High School Lady Wolverine volleyball team opened play in the state volleyball tournament last week when they hosted Rabun County on Wednesday afternoon. Rabun made the three-and-a-half-hour bus ride from Tiger arriving only a few minutes before the first set

The Lady Wolverines got off to a good start by taking the first set 25-20 in the best of five match.

The ladies of Rabun bounced back in the second set, downing Dade in a close match 26-24 to even the match at 1-1.

The Lady Wolverines settled in and took the third set 25-10, dominating the visitors from the start.

The same would be true for the fourth set as DCHS continued to dominate, taking the fourth and deciding set, 25-9 and the match 3-1, to advance to the Sweet Sixteen while Rabun’s season ended, and they took the long ride back to Tiger.

Nest up for the Lady Wolverines was Mt. Bethel, a private school in Atlanta. Dade traveled there for a Saturday afternoon match hoping for a spot in the Elite Eight.

The Lady Wolverines settled in and took the second set 25-21 against the top ranked team in the state in Class A, to even the match 1-1.

In the third set Dade struggled and fell 12-25.

In the fourth set the Lady Wolverines needed a big rally to stay alive, but it was not meant to be as they dropped the set 19-25 and the match 3-1.

The Lady Wolverines had another big year finishing second in Region 7A and advancing to the state tournament. Congratulations on a great season!