The Dade County High School football team celebrated homecoming Friday night with all the festivities that go along with the game. Different activities all week at school, a parade, and then the big game. None of that distracted the Wolverines from the main task, the game!

The Wolverines took the opening kick from the Coosa Eagles and quickly moved the ball down field primarily with the running game. The drive ended with a 24-yard touchdown run by Brody Cooper and the extra point kick by Caroline Tremmier made it 7-0 with 9:04 remaining in the first quarter. 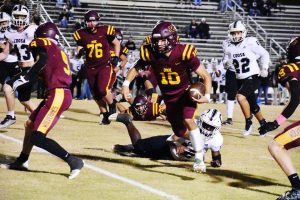 The Wolverines’ Brody Cooper had a big night at homecoming Friday when he ran for four touchdowns and threw for another in the big 44-14 region win. Dade is in the running for a spot in the state playoffs and will travel to Chattooga this week for another big region game.

Dade’s defense then took over and shut down the Eagles forcing a punt. The Wolverines started with good field position and quickly scored again, this time on a one-yard-run by Cooper. The extra point was no good and the Wolverines were up 13-0 with 6:11 remaining in the first quarter.

The Coosa offense got their first first down of the game on their next drive, but the Wolverine defense shut them down again after that and Dade’s offense went back to work.

With 7:35 remaining in the first half Braylon Sullivan got his first touchdown of the night on a big 44-yard run, breaking several tackles along the way. The two-point conversion try was no good and the Wolverines led 25-0.

The Eagles got their first points of the game on their next drive, scoring on a 3-yard run with 4:18 remaining in the first half. With the extra point kick the Wolverines led 25-7.

In the third quarter DCHS added to their lead when Cooper threw a pass to Demetrius Walker for a 25-yard touchdown and the Abigail Tremmier kick was good giving the Wolverines a 32-7 lead with 4:42 remaining in the third quarter. 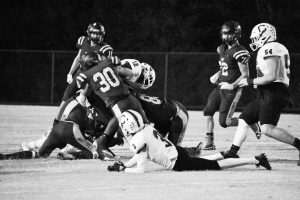 The Wolverine defense dominated the Coosa Eagles on Friday night allowing just 200-yards
of total offense in the 44-14 win. The Wolverine defense has played well all season and improving each game. Their next home game will be Thursday, Oct. 27 against the Pepperell Dragons.

Early in the fourth quarter Landon William raced up the middle untouched for a 47-yard touchdown giving the Wolverines a 38-7 lead with 11:52 remaining in the game.

This time the Eagles responded with a touchdown of their own on a 61-yard pass and the extra point made it 38-14 with 10:10 remaining in the game.

Dade was not finished as Cooper scored his fourth touchdown of the night, this time on a 46-yard run giving them a 44-14 lead.

The Wolverines drove the ball to the Eagles’ two-yard line with a minute left in the game and ran out the clock to take a big region win, 44-14.