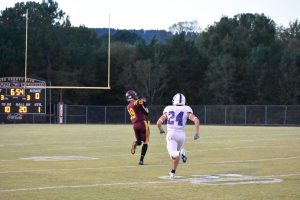 EDDY GIFFORD/Dade County Sentinel
Zeke Wheeler catches a long pass from Brody Cooper for a touchdown Friday night against the Darlington Tigers. The play covered 74 yards and tied the game at 7-7. The Wolverines fell to the Tigers by the final score of 33-7.

The Dade County High School Wolverine football team hosted the Darlington High School Tigers on Friday night in the first region game of the season. This was the Wolverines first game in a new region after being reclassified to single A large, region 7 earlier this year.

The Wolverines took the opening kickoff and moved the ball down field but fumbled at the Tigers’ 20 yard line and the Tigers recovered the ball.

Darlington moved the ball to the 41 yard live and quarterback Jack Good threw to Talan Shirey for a 59-yard touchdown. The point after kick by Ryland Scott was good and the Tigers took a 7-0 lead.

The two teams battled toe to toe the remainder of the first quarter but neither team scored again, and it ended tied 7-7.
Early in the second quarter the Tigers found the end zone again when Good threw to Braden Bell for a 20-yard touchdown with 9:35 remaining in the first half. The Tigers two-point conversion try was no good and they led 13-7.

Darlington quickly scored again on their next possession when Good threw to Slade Clevenger for a 36-yard touchdown with 7:10 remaining in the first half and this time the Scott kick was good, and the lead was now 20-7.

While Dade struggled to move the ball against the big Tiger defensive line Darlington found the end zone again with 3:30 remaining in the first half when Good ran 32-yards for the score and the point after kick was no good and Darlington now led 26-7.

The Wolverines played much better in the second half as they moved the ball, but penalties hurt them at critical times and the Tiger defense produced big plays when they needed them.

The third quarter was scoreless as the only score was called back on a holding penalty on Darlington.

In the fourth quarter the Tigers’ Good threw his fourth touchdown pass of the night when he hit Shirley for the 25-yard score and the Scott kick make it 33-7 with 6:36 remaining in the game.

That would be all the scoring and the Tigers claimed the first region win of the season over the Wolverines 33-7.

Penalties hurt both teams as a total of 24 were marked off with Dade having 12 for 115 yards and Darlington had 12 for 105 yards.

Wheeler led Dade’s offense with four receptions for 119 yards and one touchdown while Cooper completed 11 of 23 passes for 152 yards. The Wolverines managed just 66 yards rushing in the game led by Evan Koger with eight carries for 29 yards.

This week the Wolverines will be back on the road as they travel to Trion to face the Bulldogs in another region game with kickoff set for 7:30 p.m.