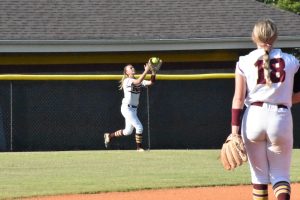 Dade took the lead in the first inning when Ali Thompson singled, stole second and scored on a single by Kaitlyn Stinnett to go up 1-0.

The Lady Indians went down in order in the first two innings while the Lady Wolverines got a runner to third in the bottom of the second but was unable to score.

Chattooga then loaded the bases in the top of the third, but Dade’s defense rose to the occasion and did not allow a run to maintain their 1-0 lead.

In the bottom of the third the Lady Wolverines put three runs on the board with three hits, the big hit being a double by Kendyl Phillips. The lead was now 4-0. Dade pushed two more runs across in the fourth and two more in the fifth to take the win 8-0, stopped after five innings on the run rule.

Kayleigh Warnock pitched the five-inning shutout, throwing just 65 pitches and giving up three hits and striking out three for the win.

Stinnett led the offense with three hits and two RBIs while Ali Thompson, Kendyl Phillips, and Falyn Baggett had two hits each with Baggett also having a pair of RBIs.

On Thursday, Sept. 22 DCHS traveled to Darlington High School to face the Lady Tigers and all the scoring in the game came in threes.

The Lady Wolverines put three runs on the board in the top of the first inning on three hits to take the early lead.

After scoreless inning in the second and third Dade put three more runs on the board in the top of the fourth, on three more hits to take a 6-0 lead.

It was three more runs in the top of the fifth for the Lady Wolverines, this time on four hits to give them a commanding 9-0 lead.

Dade needed three outs in the bottom of the fifth to end the game, but Darlington rallied for three runs to cut the lead to 9-3 and extend the game.

The Lady Wolverines started this week off with a trip to Gordon Lee for a non-region game before returning home on Tuesday where they faced the Coosa Lady Eagles in a region game.

Trion’s Lady Bulldogs will come to DCHS on Thursday. The Lady Bulldogs handed the Lady Wolverines their only region loss earlier this season so they will be looking for revenge in this game. First pitch is at 5:30 p.m.

Get out and support the Lady Wolverines softball team as they head into their final few games before the state playoffs begin.