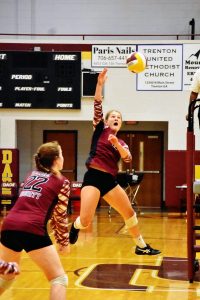 EDDY GIFFORD/Dade County Sentinel
Heidi Raines goes high for the kill in recent action. The Lady Wolverines had a big week winning all six matches. They are currently 3-1 in region play and state ranked.

The Dade County High School Lady Wolverine volleyball team was busy last week playing six matches and winning them all. Overall, they won 12 sets and lost just one during the week. That one loss was to Chattooga and Dade took that match 2-1.

In their first match of the week, they faced Marion County and took the match in two sets winning 25-17 and 25-16. In that match Zoie Smith had 18 assists, and Brooklyn Konrad had 11 kills, while Delaynee Davis recorded 16 digs.

In their next match DCHS faced off against Murray County and picked up their second win with scores of 25-17 and 15-19. Davis recorded seven digs, Anna Ballard five digs. Smith eight assists, and Konrad recorded eight kills.

The Lady Wolverines then traveled to North Jackson, Ala., for two matches. The first was against North Jackson and they made quick work defeating them in two sets 27-7 and 28-13 to take the match 2-0.

The Lady Wolverines then faced DAR and it was another two-set win as they defeated them 25-22 and 27-22.
Konrad recorded six kills and three blocks, Smith had 12 assists and 12 digs, and Davis had 16 digs and Raines had 10 digs.

On Thursday it was back to region play as they traveled to Trion to face the Lady Bulldogs. It was another two-set win for Dade defeating Trion 25-10 and 25-7.

The Lady Wolverines are now 18-7 overall and 3-1 in region play.

This week the team traveled to Darlington on Tuesday to face the Lady Tigers and the Coosa Lady Eagles.