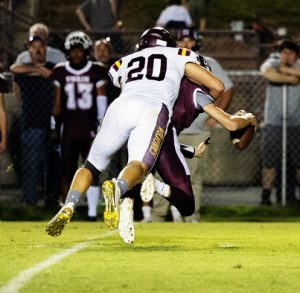 Photo courtesy of Rusty Cooper
The Wolverines Landon Williams makes a big hit on the Swain County quarterback Friday night as Dade’s defense dominated the game. The Wolverines defeated Swain County 14-0 to improve to 3-1 for the season as they head into region play this week against the Darlington Tigers at Magic Morgan Stadium. Kick off is set for 7:30 p.m.

The Wolverine football team made the long trip to Bryson City, N.C., last Friday to face the Swain County Maroon Devils in the final game before region play begins next week.
The Maroon Devils came into the game with a 3-1 record while Dade came in sporting a 2-1 record picking up two wins in a row after dropping their season opener.
The game started out as a defensive struggle as the two teams swapped punts early in the game. The Wolverines put together a couple of good drives only to fall short of the goal line until 49 seconds remained in the first quarter.
Brody Cooper threw to Evan Koger for a 20-yard touchdown and the Caroline Tremmier kick was good and the Wolverines took the lead 7-0.
Dade’s defense dominated the host Maroon Devils the entire first half, keeping them out of the end zone and off the scoreboard while the offense moved the ball up and down the field but was unable to score again but held the lead 7-0 at the end of the first half.
The Wolverines took up where they left off in the second half, dominating on both sides of the ball but just could not manage to cross the goal line again until late in the third quarter.
With 1:50 remaining in the third quarter Koger ran into the end zone from 7 yards out for his second score of the night. The Caroline Tremmier kick was good, and the Wolverines increased their lead to 14-0.
The only other scoring threat came in the fourth quarter when Dade attempted a field goal, but the attempt was no good.
The Wolverines picked up the 14-0 win over a very good football team but completely dominated the host on both sides of the ball.
Dade’s defense held the Maroon Devils to just 79 yards of total offense, 71 yards rushing and 8 yards passing while the offense racked up 300 total yards, 166 rushing and 134 passing. The Wolverines hurt themselves with penalties, getting flagged 11 times for 105 yards.
It was a big win for the Wolverines as they head into region play this week against the Darlington Tigers at home with kickoff set for 7:30 p.m.
Landon Williams led the defense with 7 tackles, 6 solo, 2 assists, a sack, and 4 tackles for loss. Jax Guinn also had a big night with 6 tackles, 4 solo, 4 assists, and 1–1/2 tackles for loss. Zeke Wheeler finished with 3 tackles, 2 solo, 2 assists, and a 1/2 tackle for loss, while Nik Pell had 3 tackles and Caleb Massey had 2 tackles, 2 assists and a pass interception.
On offense Cooper completed 11 of 20 passes for 121 yards and one touchdown and Wheeler completed 1 pass for 15 yards.
Wheeler had 3 receptions for 35 yards while Demetrius Walker and Nick Eacret had 2 receptions for 27 yards each.
Cooper had 13 carries for 61-yards, Wheeler 10 carries for 45-yards, Koger with 14 carries for 41-yards and Williams had 5 carries for 19-yards.
The Wolverines open play in their new region, A D1 Region 7, Friday night when they host the Darlington Tigers.
Darlington comes in with a 3-0 record having defeated Sonoraville, Christian Heritage, and Northwest Whitfield. The Wolverines are 3-1 with wins over North Sand Mountain, Marion County, and Swain County with their only loss coming to Athens Academy.
This will be a big early season test for the Wolverines who are playing great football as coach Jeff Poston and his staff has done an excellent job getting them ready.
Get out and fill the stands and support the football team as they open region play at 7:30 Friday night at Magic Morgan Stadium.
Go Wolverines!