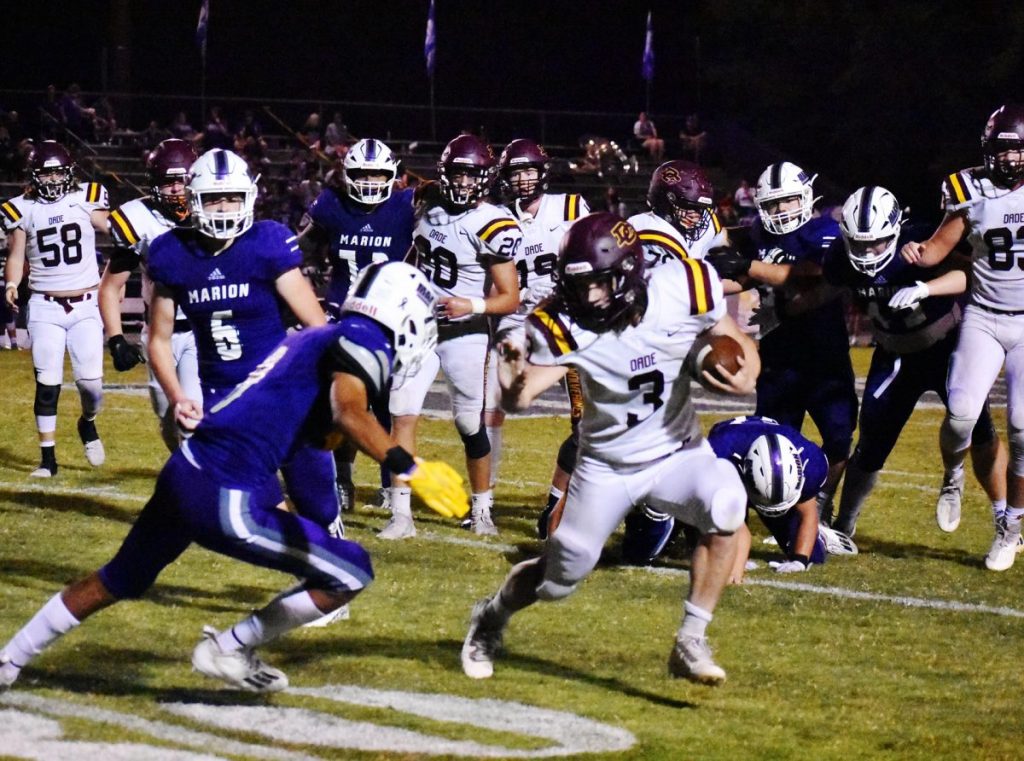 EDDY GIFFORD/Dade County Sentinel
The Wolverines’ Evan Koger had a big night against the Marion County Warriors with 21 carries for 211 yards and two touchdowns in the Wolverines’ 27-0 win. His longest run of the night was for a 56-yard touchdown in the fourth quarter.

The Dade County High School Wolverine football team traveled to Jasper, Tenn., last Friday night to face the Marion County Warriors in a big area match up. The Warriors chose this game as their homecoming, which turned out to be a big mistake as Dade dominated the game from the opening kick.

The Wolverines scored their first touchdown with 8:39 remaining in the first quarter when Braylon Sullivan scored on an 11-yard run and the Caroline Tremmier kick put the Wolverines on top 7-0.

DCHS continued to dominate the first half marching up and down the field but each time they were hurt by penalties or missed assignments on key downs. Also, Sullivan went out with a shoulder injury early in the second quarter and did not return to the field for the remainder of the game.

Early in the third quarter Landon Williams found the end zone for the Wolverines with 8:26 remaining on a one yard run after a long drive. The extra point attempt, after a penalty, was no good and the Wolverines led 13-0.

In the fourth quarter Dade put the game away, scoring first on a 15-yard touchdown run by Evan Koger. The Wolverines then elected to go for the two-point conversion and Brody Cooper ran in for the score to put them on top 21-0 with 9:21 remaining in the game.

With 4:42 remaining Koger ran around right end, and 56 yards later crossed the goal line with his second touchdown. The extra point try was no good and the Wolverines led 27-0.

That would be all the scoring for the night as both teams substituted a lot in the final minutes of the game.

For the second game in a row the Wolverine offense ran up big numbers on offense as they ran the ball for 489 yards and tacked on another 53 yards passing for 542 yards of total offense.

The defense had another stellar game as well holding the Warriors to just 106 yards rushing and 57 yards passing for 163 total yards.

The offense was led by Koger who had 21 carries for 211 yards and two touchdowns. Williams finished the night with 14 carries for 108 yards while Sullivan had 8 carries for 60 yards in one quarter of play. Both Williams and Sullivan also scored touchdowns.

The Wolverines are off to a 2-1 start to the season and will be making the long trip to Bryson City, N.C., this week to face Swain County. Kickoff has been set for 7:30 p.m. for anyone making the trip.

DCHS will be at home Sept. 23 for their first 1A D1 Region 7 game against the Darlington Tigers. Kickoff for that game has been set for 7:30 p.m.