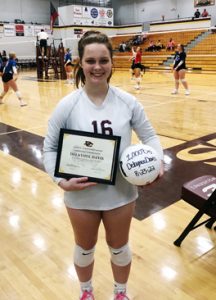 DCHS opened the week against Etowah from Attalla, Ala. The Lady Wolverines took the match in two competitive sets, 25-18 and 25-12 for the 2-0 win.

Next up for the Lady Wolverines was Gadsden City and it was another two-set match as they won 25-21 and 25-8 for the 2-0 match.

For their third match of the day DCHS faced Ft. Payne, Ala., and suffered their first defeat of the week dropping the first set 25-6 and the second set 25-23.

Dade bounced back in the second set for a 25-17 win forcing the third and deciding set which the Lady Indians pulled out 15-9 to claim the match 2-1.

With the loss the Lady Wolverines dropped in the 1A rankings to fifth and are looking forward for a rematch with the Lady Indians somewhere down the line.

The five matches in three days took a toll on the Lady Wolverines. They traveled to a tournament on Saturday and dropped three matches to much larger schools.

The Lady Wolverines are currently 11-7 for the season and 1-1 in region play.

This week’s schedule included a match on Monday against Murray County and Marion County, Tenn., and then the team traveled to North Jackson, Ala., on Tuesday for two matches.

On Thursday they travel to Trion and also face Chattooga in a pair of Region 7 matches.

Get out and support this exceptionally good Lady Wolverine volleyball team!