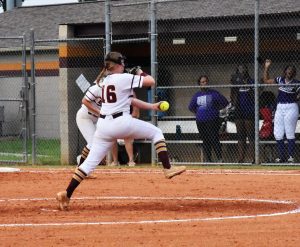 EDDY GIFFORD/Dade County Sentinel
The Lady Wolverines’ Kayleigh Warnock has been a workhorse in the circle this season pitching most games and having a good season. The Lady Wolverines are in the thick of a tough region schedule and are positioning themselves for another run in the state tournament at the end of the season.

The Dade County High School Lady Wolverine softball team traveled to Trion High School on Tuesday to face the Lady Bulldogs in a region match up between two of the top teams in Region 7-A D-1. Unfortunately, the rains came early, and the game had to be postponed.

So, on Wednesday afternoon Dade County made the return trip to Trion for another try at getting the game in. The weather was much different as the game was played under sunny skies and it lived up to the early expectations.

Dade has battled from behind several times this season and Wednesday was no exception. In the top of the third inning, they pushed across two runs to cut Trion’s lead in half, 4-2. A hit batter started the inning, and a pair of timely singles scored the two runs to put them back in the game.

The game settled down in the bottom of the third and in the fourth inning as neither team was able to score as both pitchers controlled the game.

In the top of the fifth inning the Lady Wolverines scored again on a double by Ali Thompson and singles by Alyssa Wilson and Kaitlyn Stinnett got them within one, 4-3.

In the top of the sixth Dade tied the game when Kayleigh Warnock singled and scored making it 4-4.

The Lady Bulldogs, who had been silent for three innings after taking the 4-0 lead, found themselves in a new game. A leadoff single got them started and Dade’s defense fell apart as Trion scored four runs in the inning on just one hit, two walks and three errors to take the lead 8-4 after six innings.

The Lady Wolverines were then retired in order in the seventh inning and dropped their first region game of the season by the final score of 8-4.

Thompson and Stinnett with two hits each while Kendyl Phillips had one hit and two RBIs.
Warnock took the loss pitching seven strong innings giving up just one earned run while striking out five and walking five.

The Lady Wolverines will have this week off before resuming region play on Tuesday, Sept. 13 when they travel to Pepperell for a 5 p.m. game and then host Armuchee on Thursday, Sept. 15 with the game starting at 5:30 p.m.