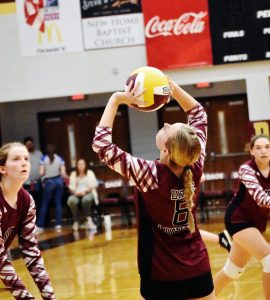 EDDY GIFFORD/Dade County Sentinel
Zoie Smith sets up another assist for the Lady Wolverines volleyball team, which is off to a 9-3 start this season. Smith is the all-time leader in assists for the team recording over a 1,000-assists heading into this season and added 33 against LaFayette last week.

Dade County High School’s Lady Wolverine volleyball team had a pair of big matches last week as they hosted LaFayette and Ridgeland. Neither of the teams are in Dade’s area but were important matches as this team works for that all important spot it the state playoffs at the end of the season.

Playing teams from higher classifications always helps make you better and the Lady Wolverines have been on a roll lately compiling a 6-2 record heading into these two matches. The extremely competitive matches help the team later in the season as area play continues next week.

First up for the Lady Wolverines was the LaFayette Lady Ramblers. Dade County defeated the Lady Ramblers in two sets 25-21 and 25-18 taking the match 2-0.

Next up for the Lady Wolverines was the Ridgeland Lady Panthers who defeated them earlier in the season and while they lost to them again it was an extremely competitive match.

The Lady Wolverines are now 9-3 on the season with big matches coming up this week.

On Tuesday, Sept. 6 the Lady Wolverines travel to Fort Payne, Ala., and faced Etowah, Fort Payne, and Gadsden City in out of area matches.

On Saturday, Sept. 10 the Lady Wolverines will travel to Ridgeland for the Ridgeland Tournament with times and opponents to be determined.