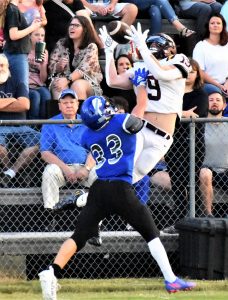 EDDY GIFFORD/Dade County Sentinel
The Wolverines’ Zeke Wheeler goes high for the catch in Friday night action against North Sand Mountain. The catch set up the Dade’s first touchdown of the game. DCHS went on to win 50-13.

The Dade County High School Wolverine football team traveled to North Sand Mountain on Friday night to face the Bison as both teams were looking for their first win of the season.

DCHS dropped a hard-fought game to Athens Academy last week while NSM lost to Valley Head in week one.

Dade’s defense stopped NSM on their next possession and again the Wolverine offense took care of business as Cooper scored again, this time on a 48-yard run. The Abigail Tremmier kick was good, and the DCHS had an early 14-0 lead.

Early in the second quarter the Wolverines’ Braylon Sullivan got in on the scoring on a four-yard run and Caroline Tremmier kicked the extra point to put the Dade up 21-0 with 9:02 remaining in the first half.

Sullivan would find the end zone again with 5:14 remaining in the first half, this time on a 62-yard run. After an off-sides penalty against the Bison the Wolverines elected to go for the two-point conversion and Sullivan ran it in to make it 29-0.

With one-tenth of a second remaining on the clock Dade lined up for a field goal attempt, but North Sand Mountain’s defense blocked the attempt. Zeke Wheeler picked up the blocked kick and ran it in for a touchdown and the Abigail Tremmier kick made it 36-0 at the end of the first half.

The second half would be more of the same as the Wolverines dominated on both sides of the ball.

Sullivan got his third touchdown of the night in the third quarter on a 7-yard run and Caroline Tremmier kicked the extra point to make it 43-0.

In the fourth quarter Bison quarterback Landon Keller threw to Blake Hill for an 11-yard touchdown but the extra point try was no good and the Wolverines led 43-6.

Dade County’s offense answered the NSM score when Cooper threw to Nick Eacret for a 3-yard touchdown and the Abigail Tremmier kick made it 50-6.

The Bison put the final points on the board with just six second left in the game when Landon Keller threw a 4-yard pass, and the Jackson Butgess kick was good to make the final score 50-13.

The Wolverines dominated the game racking up 551 yards of offense while Dade’s defense held the Bison to just 148 total yards.