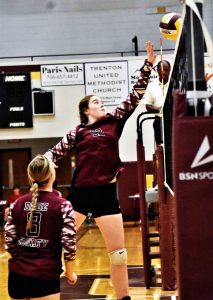 EDDY GIFFORD/Dade County Sentinel
Lady Wolverine Brooklyn Konrad returns a volley during action last week against North Sand Mountain. The Lady Wolverines had a big week picking up big wins and improving to 6-1 on the season.

The Dade County High School Lady Wolverine volleyball team was busy last week, playing four matches and winning all four to improve to 6-1 for the season.

In their first match last week they faced the Ringgold Lady Tigers taking the first set 24-17 and then taking the second set 25-23 to claim the match 2-0.

Dade County was led by Delaynee Davis with 12 digs, one ace, and one assist; Zoie Smith with 15 assists, 2 aces, and 2 digs; Heidi Raines with 4 digs and 7 kills; Abby Guffey with 3 aces, 6 kills and one assist.

The Lady Wolverines then faced off against Christian Heritage at Ringgold for their second match of the day and faced their biggest challenge.

It was then back to their home court for the Lady Wolverines to face off against Coahulla Creek. The Lady Colts proved to be tough competition as the Lady Wolverines battled to take the first set 28-26 and then took the second set in another hard fought 26-24 win to claim the match 2-0.

The final match of the week was against the Lady Bison of North Sand Mountain. This was another close match as DCHS took the first set 25-22 and then battled to take the second 25-21 and the match 2-0.

This week the Lady Wolverines hosted LaFayette and Ridgeland on Tuesday. The team is off a few days for the Labor Day holiday before traveling to Ft. Payne on Tuesday, Sept. 6 to face Etowah, Ft. Payne, and Gadsden City.

The Lady Wolverines will then be back at home on Thursday, Sept. 8 to face Pepperell and Armuchee for their first area matches of the season.