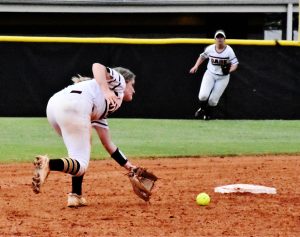 EDDY GIFFORD/Dade County Sentinel
Kaitlyn Stinnett make a play at shortstop in action last week against the Darlington Lady Tigers. The Lady Wolverines picked up two region wins last week getting off to a good start in region play.

The Lady Tigers took the early lead when they picked up a run in the top of the first inning on a hit batter and two hits.

DCHS bounced back in the bottom of the first on a lead off double by Ali Thompson who then stole third and scored on an error to tie the game 1-1.

The Lady Wolverines took the lead in the second inning when they scored a pair of runs on two hits, a walk, and a Darlington error to go up 3-1.

In the fourth inning the Lady Wolverines scored four big runs on just three hits to take a 6-1 lead.

After giving up a run in the top of the fifth Dade put the game away with four runs in the bottom of the fifth to end the game on the run rule 10-2.

The Lady Wolverines were led by Thompson with three hits, three runs, and two RBI; Karlee Welch also had three hits, two runs and one RBI; and Falyn Baggett had two hits and scored a run.

Kayleigh Warnock picked up the win going five innings giving up two runs on six hits and striking out five.

The win ended a five-game losing streak by the Lady Wolverines and got them off to a good start in region play.

On Thursday, the Lady Wolverines traveled to Coosa to face the Lady Eagles in another region game. Dade County took a 1-0 led in the first and settled into a pitcher’s dual for six innings.

The Lady Wolverines added a run in the fourth to go up 2-0 and another run in the sixth for a 3-0 lead but the Lady Eagles fought hard to stay in the game.

Dade finally blew the game open in the top of the seventh inning when they scored eight runs on seven hits, three of them doubles to take a big 11-0 win.

Kayleigh Warnock pitched a one hit shutout – striking out five in the process – to give the Lady Wolverines their second region win of the week.

Thompson again led the Lady Wolverines at the plate with three hits and three runs while Alyssa Wilson had two hits, three RBIs and scored a run.

This week the Lady Wolverines continued region play at Trion on Tuesday and will host Christian Heritage this afternoon at 5:30 p.m. in a non-region game.