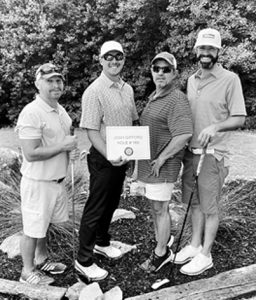 As the month of July neared an end and August was just around the corner, Sarah Moore, Golf Tournament Co-Chair reported “we are pushing it and the field of teams is almost full.” Much to the delight of the Optimist Club membership, Sarah’s predictions came true. The 34th Optimist Club Golf Tournament was at capacity and golfers were waiting. With the generous support of T and T Golf Carts, Buzz Franklin, Matt Mayfield and Sarah Moore, co-chairpersons of the event acquired extra carts allowing 30 teams to play the course.

This is the greatest number of golfers to ever tee-off for the Optimist’s annual scholarship program. Graduating seniors at Dade County High School are encouraged to apply for the Optimist scholarships awarded every year. Although golfers may not focus on the big picture as they pull up to number 10 hole, they just want to get over and around those trees.

As golf carts buzz all over the place, you can hear the golfers cheering and yelling at the ball or their fellow golfers. Whether you ask the preachers or a cart of grandmothers, “How are you doing?” you always get the same answer, “Oh we are having a really good time.” This year like others, Angi Easter who is a volunteer Optimist kept the golfers watered and fed as they were having a “really good time.”

The icing on the desert cake was door prizes for each golfer that were made possible by donations from local and surrounding businesses, restaurants, and the leg work of Donna Jones and other Optimist volunteers. There was hot coffee in the morning, water throughout the day, and lots of laughter and tall tales battered around. Some of the golfers have played this tournament for as long as they could remember. Buzz Franklin remembers playing when he was just a lad and there were only seven or so golfers. In 2022, the golfers that played and the many sponsors that continue to graciously sponsor holes made this the tournament to remember.

Winners of the 2nd Flight, first place are Wade Little, George McCall, Larry Hopkins, and Tad Brenneman. Second place winners were Kooper Knight, Mason Weathers, Tate Weathers and Grayson Brown. Patrick Brandt won the Best Dressed Golfer. Two golfers celebrated their birthdays at the golf tournament – Buzz Franklin and Dwayne Moon. When asking Dwayne what he wanted for his birthday, he said. “I got it, playing golf with two of my kids.”

Although no one shot a hole in one, the weather was beautiful and the company of fellow men and women chasing a little white ball provided a “really good time.” The Optimist members thank the golfers, the club management, the sponsors, and all those silent wonders out there that continue to make the Trenton Dade Golf Tournament all it can be and more.