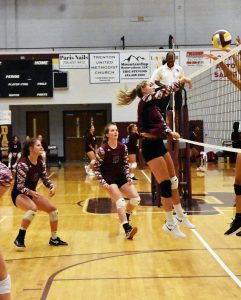 The Lady Wolverines dominated the first set downing the host Lady Lions 25-8 for the 1-0 lead.

Red Bank got it together in the second set to challenge Dade, but they still prevailed 25-15 to take a 2-0 lead.

In the third and final set the Lady Wolverines again showed their dominance, downing the Lady Lions 2-9 to win the set and the match 3-0. With the win DCHS improved to 2-1 early in the season.

This week the Lady Wolverines will be busy as they traveled to Marion County on Monday and then went to Ringgold on Tuesday to face Ringgold at 5 p.m. and Christian Heritage at 6 p.m.

Get out and enjoy some volleyball and support your Lady Wolverines!