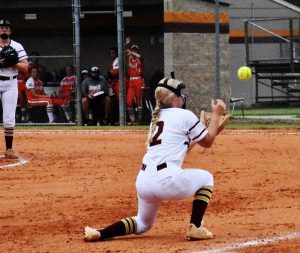 EDDY GIFFORD/Dade County Sentinel
The Lady Wolverines softball team has been struggling with the bat lately but here KK Castleberry makes the play at third during early season action. The team begins region 7A play this week.

The game started as a pitchers dual with two scoreless innings with each team picking up a hit.

In the top of the third the Lady Trojans led off the inning with a double, the runner advanced to third on a Lady Wolverine error and scored on a sacrifice fly to take a 1-0 lead.

In the fifth inning Gordon Lee added another run on two hits and another Dade County error to take a 2-0 lead.

Then in the top of the fifth inning the Lady Trojans added two more runs on a pair of doubles and two more Lady Wolverine errors to take a 4-0 lead.

In the bottom of the fifth the Dade’s Kaitlyn Stinnett hit a two out double and scored on a single by Kendyl Phillips but that would be all they could get and fell to the Lady Trojans 4-1.

Kayleigh Warnock took the loss pitching seven innings and giving up no earned runs while allowing eight hits and striking out one.

Stinnett had a double and scored a run while Kendyl Phillips had a single and RBI. Raegan Page and Warnock also had hits for the Lady Wolverines.

On Tuesday, Aug. 16 the Lady Wolverines traveled to LaFayette looking for revenge against the Lady Ramblers who won their earlier game in Trenton.

It was another pitchers dual for the first three innings as Dade’s only base runner was hit-by-pitch while the Lady Ramblers had a pair of hits in the second but was unable to score.

In the top of the fourth inning Ali Thompson doubled, stole third and scored on a single by Warnock for a 1-0 lead.

LaFayette responded in the bottom of the fourth with two runs on three hits to go up 2-1.

In the top of the sixth Thompson again led off with a double and later scored on a single by Maddie Cuzzort to tie the game 2-2.

The Lady Ramblers took the lead in the bottom of the sixth on a home run and then the Lady Wolverines were retired in order in the seventh dropping their fifth game in a row by the final score of 3-2.

Thompson and Warnock led the Lady Wolverines with two hits each with Rylee Byram having the only other hit.