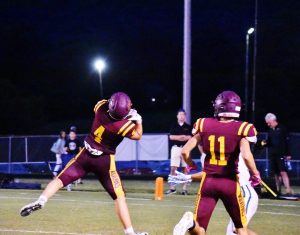 EDDY GIFFORD/Dade County Sentinel
The Wolverines Caleb Massey makes a touchdown catch during third quarter action Friday night. The Wolverines fought their way out of a deep hole in the second half, but it was not enough as they dropped the season opener to Athens Academy 41-28.

Dade County would answer four minutes later when Braylon Sullivan raced around right end and sprinted 67-yards for a touchdown to put them on top 6-3 with 1:32 remaining in the first quarter. The extra point kick was blocked by Athens Academy.

Spartan quarterback Sam Bush scored on a three-yard run with just 19 seconds remaining in the first quarter to give Athens Academy the lead and Chapeau kicked the extra point to make it 10-6.

The second quarter was all Spartans as quarterback Bush took over, scoring on runs of 43 and 6 yards while Chapeau kicked the extra points to make it 24-6 at the end of the first half.

The Wolverines took the second half kick and drove down the field before mistakes gave the ball back to the Spartans.
Then with 9:51 remaining in the third quarter Athens Academy scored again, this time on a one yard run by Jeremiah Wingfield. Chapeau’s kick made it 31-6 Spartans.

Dade could have easily packed it in at that point but instead they rallied and mounted a comeback.

With 2:45 remaining in the third quarter Brody Cooper threw to Caleb Massey for a 7-yard touchdown. After a penalty on the Spartans the Wolverines went for the two-point conversion and Braylon Sullivan ran in for the score to cut the lead to 31-14.

On the Spartans next possession, Dade intercepted a pass and started another drive. This time Cooper ran in for a one-yard score and the extra point kick by Abigail Tremmier was good to cut the Spartan lead to 31-21 with 1:22 remaining in the third quarter.

Early in the fourth quarter Chapeau struck again for the Spartans with a 43-yard field goal that would have been good from 55 yards or more to put Athens Academy up 34-21.

The never-say-die Wolverines continued to battle and with 7:15 remaining in the game Cooper threw to Caleb Massey for a 35-yard touchdown. The Caroline Tremmier kick was good, and the Wolverines were now down just six points, 34-28.

While the Wolverines were unable to score again the Spartans added another touched for the final score of 41-28.
Dade’s early mistakes hurt them in the long run, but they showed a lot of fight and never quit in the opening loss.
The Wolverines out–gained the visiting Spartans 380 total yard to 333.

Cooper completed 15 of 26 passes for 207 yards and threw one interception and two touchdowns. Sullivan had 15 carries for 132 yards and one touchdown.

Zeke Wheeler caught seven passes for 99 yards and Brandon Willerson had three receptions for 45 yards and Massey had two catches for 42 yards and two touchdowns.

Coach Jeff Poston said, “I did a poor job of getting our kids ready to play in the first half. I was extremely proud of how they responded in the second half.”

This Friday night the Wolverines travel to North Sand Mountain for their big rivalry game with kickoff set for 8 p.m. EDT.

Take the short drive to Higdon and support the Wolverines as they look to pick up their first win of the season.