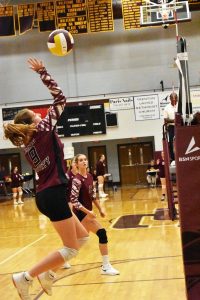 First up for Dade was the Rome Wolves and after falling behind early the Lady Wolverines battled the entire first set, finally losing 25-18.

The second set was another hard-fought battle as it seemed every time, they would get close the Lady Wolves would run off several unanswered points. When the match ended Rome had claimed the set 25-17 and the match 2-0.

Next up for DCHS was the Gordon Lee Lady Trojans. The first set was a hard-fought battle between two determined teams with the Lady Wolverines coming out on top 28-26.

In the second set Dade had an easier time taking down the Lady Trojans 25-16 and taking the match 2-0.

This week the Lady Wolverines traveled to Red Bank on Monday and will travel to Coahulla Creek on Friday.