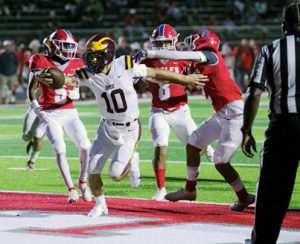 Dade County senior Brody Cooper will return this season at the quarterback position and looks to build on a solid junior year.

Following Meet the Wolverines, which will include football and other fall sports teams as well as rec league team, you can get a preview of the upcoming season with a team scrimmage. More details are at the end of this article.

Heading into a promising season Dade will be competing in Region 1A, D1, Area 7. Region members include familiar foes Chattooga, Coosa, and Pepperell along with Armuchee, Darlington and Trion.

With the season opening scrimmage scheduled for Aug. 12 at home against Lakeview Ft. Oglethorpe Wolverine coach Jeff Poston offers a preview of what to expect.

“The 2022 Wolverine football team will feature a few changes, but the overall offensive and defensive schemes will remain the same. The Wolverines will continue to run the spread offense in 2022.

Brody Cooper returns at the quarterback position, and the 6’3” 195-pound senior looks to build on a solid junior year. Brody will be surrounded by several talented weapons on offense. Zeke Wheeler will be all over the place on offense, as he will line up at running back, tight end, and wide receiver for Dade this fall. The 6’3” 205-pound Wheeler will be a huge match up problem for opposing defenses.

Braylon Sullivan, Evan Koger, and Brandon Willerson have all shown the ability to be highly successful at the running back position. Nick Eacret and Demetrius Walker will carry the load at receiver as both have very good ball catching skills.

The anchor of the offense will be the offensive line. The line returns Zac Counts, Andrew Buffington, and Landon Williams from last year’s team. Those three will be joined by Gabriel Yarbrough and Jordan Castellanos. The line is blessed with some depth this year as Grayson Cates, Brody Daniels, and Sean Corcoron have proven themselves capable of carrying part of the load as well.

Defensively the Wolverines return six starters. Landon Williams, Braylon Sullivan, Kade Pardue, Caleb Massey, Eli Kimball, and Lucas Costley all started on last season’s region runner up squad. Jax Guinn will step into the mid linebacker spot. Nick Pell will be starting at safety, and Carter Christiansen will step in where his big brother left off at corner. The defensive line will add Tanner Blake and Grayson Cates to the inside,” Poston said.

You can come watch the team practice Aug. 5th following the Meet the Wolverines event, and they will host LFO for a scrimmage game on Aug. 12.

Game one of the 2022 season will be at Magic Morgan Stadium on Friday, Aug, 19th verses Athens Academy of Athens, Ga. Game time will be 7:30 p.m. Athens Academy plays in Region 8AA.

Get out and support the Wolverines in all the activities leading up to the 2022 season. Go Wolverines!