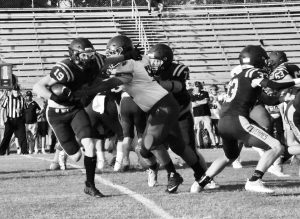 EDDY GIFFORD/Dade County Sentinel
Zeke Wheeler breaks a tackle early in the game on Friday for a big gain as the Wolverines defeated Southeast Whitfield 49-20 to end spring practice. The Wolverines kick off the 2022-2023 season at North Sand Mountain Aug. 26.

The Wolverines, who are replacing several key players from last year’s team jumped out to an early lead and went up 14-0 before the visiting Raiders got on the scoreboard. They cut the lead to 14-7 and tied the game 14-14.

Dade came back to take a 21-14 lead, but the Raiders again scored but chose to go for the two-point conversion. The Wolverines stopped the attempt and lead at the end of the first half 21-20.

The second half was Dade County as the coaches got a look at a lot of young players along with several returning starters from last year and cruised to a big 49-20 win. The win will be a big confidence builder, especially for some of the younger players who had a big night.

No stats were available for the game, but the Wolverines dominated play over the much bigger Raider team.

Coach Jeff Poston offer the following comments on the scrimmage:

“I was proud of how physical we played Friday. I expected us to make a ton of mistakes, assignment wise. Spring is always tough, but we had six or seven kids out with the flu, and kids still doing track.
We had two days of practice without a quarterback, so obviously we knew there would be a few plays when somebody stepped right when we were supposed to go left.

I was happy to see a couple kids demonstrate big play ability. We knew how good Zeke Wheeler and Brody Cooper would be offensively, but we also found out Braylon Sullivan, Brandon Willerson, Evan Koger, Demetrius Walker, Caleb Massey, and Nick Eacret can help make plays as well.

We got a lot of good film on a bunch of kids, and that helps us going into summer. We are going to get plenty of reps this summer, and I am excited to watch this group grow closer together.”

While football season is still several months off August will be here before you know it. The Wolverines open the 2022-2023 season with three away games, traveling to North Sand Mountain on Aug. 26; to Marion County on Sept. 9; and to Swain County (Bryson City, N.C.) on Sept. 16.
The Wolverines first home game of the season will be on Sept. 23 when they host Darlington in their first region game.