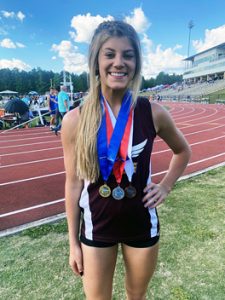 Stella Henry was named State Champion in the triple jump, second place in long jump and third in high jump

The Dade County High School track and field team finished off a record setting year at the state championships this past weekend.

This past weekend at the state championships the Wolverines were well represented with six qualifiers.

Stella Henry stole the show as she competed in four events. Her weekend started on Thursday when she competed in three field events. First up was her first set of jumps in the

Ian Byrd placed third in the pole vault for the Wolverines.

triple jump. She then had to go to the opposite end of the facility to compete in the high jump where she finished third for her first metal of the day.

It was back to the opposite end of the facility to finish the triple jump competition where she made history becoming the first track athlete to win a State Championship in 20 years with a jump of 37’ 10-1/2”.

After making the winner’s stand twice, she competed in the long jump where she finished second. They may not have known Stella Henry at the beginning of the season, but they did when the day was over.

Sophomore Raegan Page and junior Ian Byrd have been putting in the work on the pole vault and it has paid off. Ian, who also placed last year, cleared the 12’ mark but could not quite hit the 12’6” mark and earned a third-place finish in the event.

Raegan Page, who decided to give the sport a try this season and continued to improve as the season went on. She cleared 9’ – a personal best and beating her sectional performance by a foot – to make the podium as the fourth-place finisher.

Kristen Fowler competed in the 400m run but failed to medal in the stiff competition. Stella Henry also qualified in the 100m dash but did not make the podium in that event.

Congratulations to the athletes and coach who made history this year for Dade County High School!