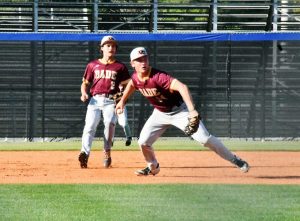 EDDY GIFFORD/Dade County Sentinel
Landon Williams fields the ball from third base to throw the runner out at first in last week’s game against the Model Blue Devils.

The Dade County High School Wolverine baseball team traveled to Model on Monday, April 18 to face the Blue Devils in the first game of a three-game series. The Blue Devils entered the game as the top team in Region 7-AA with an impressive 21-4 overall record.

The Wolverines went down quietly in the top of the first inning on a ground out and a pair of strikeouts.

In the bottom of the second the Blue Devils scored the game’s first run on a lead off triple and a sacrifice fly to take a 1-0 lead.

The second inning for DCHS was a replay of the first as they went down in order, again with a ground out and a pair of strikeouts.

Model picked up four big runs in the bottom of the second on a pair of hits and three Dade errors to take a commanding 5-0 lead after two innings of play.

The Wolverines got their first base runners of the game in the top of the third inning with a pair of walks, but another two-strikeout inning ended any chances of scoring.

The game remained 5-0 and heading into the sixth inning DCHS still did not have a hit in the game.

In the sixth with one out and another walk, Landon Williams got the Wolverines first hit of the game.

That was followed by a hit by Zeke Wheeler to load the bases, but back-to-back strikeouts ended the threat and the scored remained 5-0.

The Wolverines managed a base runner in the top of the seventh on a hit batter but was unable to score and the game ended with the Blue Devils taking game one 5-0.

Brodie Swader took the loss for the Wolverines pitching five innings and giving up just one earned run while striking out eight.

Williams and Wheeler had the only Wolverine hits.

On Wednesday, April 20 the Blue Devils came to Trenton for the second game of the series.

The game turned into a pitchers’ dual as both teams struggled to get runners in scoring position in the second and third innings.

In the top of the fourth inning the Wolverine defense hurt them again and the Blue Devils pushed across two unearned runs on a pair of Dade errors to take a 2-0 lead.

While the Wolverine pitching remained strong the remainder of the game their offence struggled getting only one hit in the game and Dade fell 2-0 to the Blue Devils.

In the first two games of the series the Wolverines gave up just one earned run but lost both games.

The only Wolverine hit of the game came on a Burch single in the fourth inning.

Game three of the series was back at Model on Friday and the Blue Devils took the early lead, scoring a pair of runs in the bottom of the first inning to take a 2-0 lead.

In the top of the second Nethery got the Wolverines started with a single and after a single by Braylon Sullivan, a walk by Jax Guinn, Nethery scored on a single by Mason Gatlin to cut the lead to 2-1.

In the top of the third Dade put more runs on the board with a Wheeler single, doubles by Kimball and Burch and a Model error scored three runs to give the Wolverines a 4-2 lead in the middle of the third inning.

The Blue Devils pushed across a run in the bottom of the third on three hits to cut the Wolverine lead to 4-3.

In the bottom of the fourth Model scored two more runs aided by a pair of Dade errors to take the lead 5-4.

That would be all the scoring in the game and the Wolverines dropped their third straight close game to the Blue Devils.

Burch had two hits and two RBI’s while Wheeler, Kimball, Nethery, Sullivan, and Gatlin all had hits for Dade.

The Wolverines season ended with a 14-15 overall record.