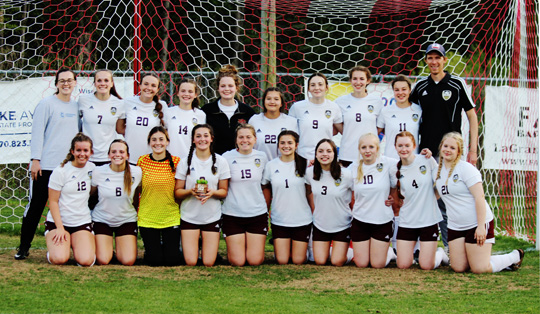 On Thursday, April 14 the Dade County High School girls’ soccer team made history by winning the program’s first state tournament match on the road. The Lady Wolverines traveled to Callaway High for a first round clash between the number 10 and 11th ranked teams in Georgia’s class AA and Dade came out victorious.

The Lady Wolverines were ready from the opening whistle and jumped on Callaway early with pressure and possession. A breakthrough for Dade came five minutes into the match when Caroline Tremmier cracked a shot from outside the 18 that found the back of the net after bouncing off Callaway’s goalkeeper’s hands.

Callaway increased their physical play and things got chippy as both teams didn’t back down. Even with their physical play, Callaway was unable to create scoring opportunities because of the strong defensive play of Kristen Fowler, Blythe Jelley, Ayden Miles, Maddie Cuzzort, Karlee Welch, and goalkeeper Abbigail Tremmier.

Things did get a little interesting though with two minutes left in the match.

Callaway received a lifeline when they broke through and were able to score. The Lady Wolverines kept their composure and closed out the match without any further trouble, giving them the 2-1 win and a berth to the second round of the playoffs.

Great play from midfielders Caroline Tremmier, Anna Ballard, and Lila Evearitt controlled the middle of the field while Abby Dwyer and Ella Ballard caused all sorts of havoc on the edges.

The Lady Wolverines are back in action today, April 20 when they travel to Lamar County for the Sweet 16.

Aaron Stanton is coach of the Lady Wolverines soccer team.