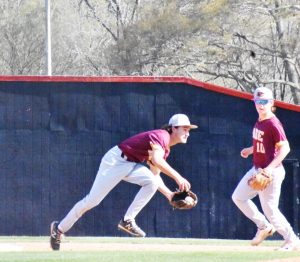 EDDY GIFFORD/Dade County Sentinel
Malachi Burch fields the ball from short stop in last week’s game at Pepperell High School. The Wolverines will travel to Calhoun on Friday to face Gordon Central in a doubleheader.

The Dade County High School Wolverine baseball team traveled to Pepperell on Monday, April 4 for the first game of a three-game series with the Dragons. It turned out to be a disappointing week for the Wolverines.

Brodie Swader doubled in the first inning for Dade with one out and advanced to third on an error with two out but was unable to score.

In the bottom of the first Pepperell got a runner on with one out, but a pair of strikeouts ended the inning without a run and that set the tone for the game.

The two teams struggled to get runners in scoring position except for the third inning when Pepperell got a pair of runners on but the inning ended with a double play and the score remained 0-0.

The Wolverines got a runner to second in the fourth inning and another to third in the sixth inning but was unable to push a run across as the pitching duel continued.

In the bottom of the sixth the Dragons managed three straight singles with one out to score the first run of the game and then a double scored two more to put them on top 3-0 and that was all they needed to claim the win 3-0.

Swader took the loss pitching five and a third innings giving up five hits and three runs, only one earned, while striking out four and walking two. He also had two doubles in the game to lead the offense. Zeke Wheeler and Eli Kimball picked up the other Wolverine hits.

On Friday, the Wolverines hosted Pepperell for a double header.

In the first game the Wolverines got off to a good start, scoring two when Malachi Bruch led off with a double and scored on a single by Wheeler. After a Kimball single, he moved to second on a fielder’s choice and scored on a Brayden Nethery single for the early 2-0 lead.

The Dragons responded in the top of the second inning when they scored five runs on just three hits, but four walks and a hit batter plagued the Wolverines.

Dade responded in the bottom of the second with a run on two hit batters and two walks to cut Pepperell’s lead to 5-3.

In the bottom of the seventh Dade managed a pair of runs when Nethery singled and Braylon Sullivan tripled to score one and then a ground out scored another but that was all they were able to score and dropped the game 7-5.

Swader, Wheeler and Sullivan had two hits each in the game as Sullivan and Kimball also had two RBIs.

In the second game of the day the Wolverines gave up a run in the top of the first to Pepperell but responded in the bottom of the first with a pair of runs when Swader reached on an error. Wheeler was then hit by a pitch and Kimball walked to load the bases.

Swader scored on a passed ball and Nethery singled to score Wheeler to give the Wolverines the lead 2-1.

The Dragons tied the game in the top of the second with a home run. The game would remain 2-2 until the top of the fifth inning when Pepperell took the lead on a pair of singles and a stolen base.

Dade would tie the game at 3-3 in the bottom of the sixth on a Burch double.

The Dragons responded with four runs in the top of the seventh on three hits, an error, and a walk and two hit batters to go up 7-3.

The Wolverines tried to rally back in the bottom of the seventh but managed just one run on one hit and fell to the Pepperell for the third game in a row, 7-4.

Nethery led the Wolverines at the plate picking up two hits and an RBI.