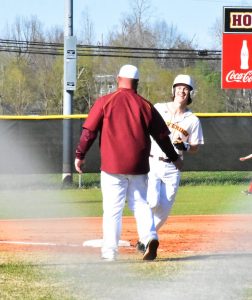 The Dade County High School Wolverine baseball team traveled to Summerville on Tuesday, March 29 to face the Chattooga County Indians in a Region 7-AA match–up, the first game of a three-game series.

The Indians took the early lead, scoring a run in the bottom of the first inning to go up 1-0.

The Wolverines answered with a pair of runs in the top of the second inning when Landon Williams singled to start the inning, Eli Kimball walked, and Brayden Nethery singled to score Williams. Kimball scored on a fielder’s choice.

The score would remain 2-1 until the top of the sixth inning when Kimball started the inning off with a single, Nethery had a sacrifice bunt followed with a double by Braylon Sullivan. An Indian error was followed by a walk, a sacrifice bunt by Malachi Burch, a hit batter, a single by Zeke Wheeler and another walk.

When the inning was over Dade had scored seven runs to take a 9-1 lead.

The Wolverines were led at the plate by Kimball and Sullivan with two hits each. Sullivan also had a pair of RBIs.

On Friday, the Wolverines hosted the Indians in a double header.

In the first game Chattooga picked up a run in the top of the first inning to take the lead, but Dade responded in the bottom of the first with a run to tie the game 1-1.

The Wolverines scored three in the bottom of the second – the big hit came from Swader – a three-run homer to put the Wolverines up 4-1.

After scoring two runs in the third inning Dade scored five in the bottom of the fifth to end the game 11-1.

Swader picked up the win pitching five innings, giving up just one run on one hit and striking out nine.

Swader also led DCHS at the plate picking up two hits and three RBIs and scoring two runs. Williams also had two hits and Kimball had two RBIs and one hit.

The second game of the day the Wolverines took the early lead, scoring in the first inning on a long Swader home run.

In the third inning Dade scored three runs, two on Swader’s third home run of the day and another on Nethery’s single to go up 4-0.

The wheels ran off for the Wolverines in the fourth inning when the Indians scored three runs, only one earned, on two hits and a couple of Wolverine errors to cut the lead to 4-3.

The Indians would take the lead in the top of the fifth when they scored a pair of runs to make it 5-4.

Chattooga’s bats stayed hot in the fifth when they scored two runs and then added three more in the top of the sixth to increase their lead to 8-4.

In the bottom of the sixth the Wolverine bats were red hot, picking up five hits to go along with a hit batter and three walks that resulted in seven runs and a 11-8 lead.

The Indians did not go quietly however and scored two runs in the top of the seventh and had a runner on when the third out was made.

This week the Wolverines traveled to Pepperell on Monday. The Wolverines are scheduled to be at home today to face Pepperell in a doubleheader weather permitting. If they are unable to play today, the games will be rescheduled for later in the week.