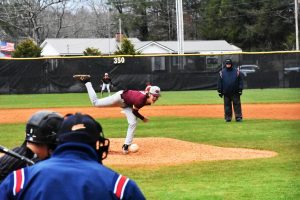 EDDY GIFFORD/Dade County Sentinel
Brodie Swader shut down the Fannin County Rebels at the plate on Friday going the full seven innings, striking out 10 and giving up only one hit. The Wolverines won the first game of the double-header 1-0. Dade will be at home Friday when they host Chattooga in a double-header. First pitch is at 5 p.m.

The Rebels got off to a fast start scoring four runs in the top of the first inning on three hits and two Wolverine errors to take the early lead.

Dade managed a couple of base runners in the bottom of the first but could not get the big hit and it remained 4-0 after one inning of play.

In the third inning the Wolverines fell apart. The Fannin County bats came alive, and Dade’s defense fell apart and the Rebels scored nine runs before the Wolverines were able to shut them down to take a 13-0 lead.

DCHS managed to score a run in the bottom of the third but then the Rebels answered in the top of the fourth with two more runs to make it 15-1.

In the bottom of the fourth the Wolverines scored two runs to make it 15-3 but Fannin answered again with two runs to put them up 17-2 in the fifth inning.

Dade then went down in order in the bottom of the fifth and fell to the Rebels 17-3.

It was a complete disaster for the Wolverines, committing 10 errors and collecting just four hits in the game.

Bryson Shrader had two hits and an RBI while Brayden Nethery and Braylon Sullivan picked up one hit each for the Wolverines.

Nethery took the loss with Landon Williams and Mason Gatlin coming on in relief.

On Friday, the Wolverines traveled to Blue Ridge to face the Rebels in a double-header.

Brodie Swader started on the mound for the Wolverines and dominated the Fannin County hitters.

He walked a batter in the first inning and then retired the Rebels in order in the second, third, and fourth innings.

The Fannin pitcher kept the Wolverines in check as well, giving up just two hits and one walk over the first five innings.

The Rebels got their second base runner of the game in the fifth inning when they reached on a Wolverine error, but a strike out ended the inning.

In the top of the sixth inning Dade got two runners on via a walk and error but was unable to push a run across and the score remained 0-0. The Rebels went down in order in the bottom of the sixth.

In the top of the seventh Eli Kimball singled to lead off the inning. Nethery then laid down a sacrifice bunt to move him to second. Kimball moved to third on an error and Gatlin produced the big hit, a single to right field to score Kimball to put the Wolverines on top 1-0.

Swader went to the mound in the bottom of the seventh with a no-hitter and got the first two batters before an infield hit ended his no-hitter. He then retired the next batter to end the game and pick up the 1-0 win.

Swader pitched seven innings giving up one hit while striking out 10.

The Wolverines managed just four hits, Kimball had two hits while Malachi Burch and Gatlin each had a hit.

The second game of the day the Rebels took the early lead, scoring a run in the bottom of the first inning on a hit batter, walk, and a balk.

The game remained 1-0 until the top of the third inning when the Wolverines scored a pair of runs on two hits and a Fannin County error to take a 2-1 lead.

The Rebels would take the lead again in the bottom of the fifth, scoring a pair of runs on a pair of hits and a Wolverine error to go up 5-3.

The wheels ran off for Dade in the sixth inning as Fannin scored eight runs on seven hits and more Wolverine errors. The game ended with the Rebels still batting and up 13-3.

Dade again managed just four hits in the game with Swader picking up two hits and Landon Williams have a hit and RBI, and Gatlin had a hit.

Nethery took the loss giving up five runs (only two earned) and striking out three over 4.2 innings. Burch and Kimball came entered in relief and finished the game.

This week the Wolverines traveled to Chattooga County on Tuesday to face the Indians in the first game of the three-game series. On Friday, the Indians will come to Trenton for a double-header to complete the series.

The first game will start at 5 p.m. with the second game to follow.