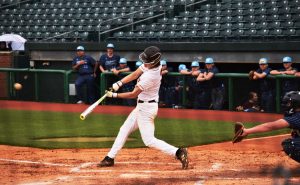 DANA NETHERY/Dade County Sentinel
Brodie Swader hit a triple in the March 15 game at Lookouts Stadium against McMinn County. The Wolverines came away with a 12-6 win. The Wolverines will travel to Fannin County on Friday for a double header with the first game starting at 5 p.m.

The Wolverine baseball team played its first Region 7-AA games of the season last week and did not get the results they were hoping for.

On Monday, March 14 the Coosa Eagles came to Trenton for a double header. The Eagles were retired in order in the top of the first inning and Dade took a 1-0 lead in the bottom of the first when Brodie Swader walked, stole second and scored on a Zeke Wheeler double.

The score remained 1-0 until the top of the fourth inning when the Eagles tied the game on a pair of hits, a walk, and a hit batter to make it 1-1.

In the bottom of the seventh the Wolverines’ Owen Dabbs walked and scored on a Brayden Nethery double to cut the lead to 4-2 but they were unable to score again and dropped the first game of the double header 4-2.

The Wolverines managed just three hits in the game with a Swader single and Wheeler and Nethery both had doubles and RBIs.

In the second game of the double header the Wolverines fell apart. Coosa scored a run in the top of the first inning on an error, a hit batter, and a pair of walks to take a 1-0 lead.

They came back in the second with three runs on two hits, two errors, and two walks to increase their lead to 4-0.

Three more runs by the Eagles in the third inning increased their lead to 7-0 as Dade committed three more errors.

When the game ended in the fifth inning Coosa came away with an easy 10-0 win as the Wolverines committed six errors in the game and Cantrell, the Eagles pitcher, came away with a no-hitter, striking out eight in the process.

Swader took the loss pitching 3.2 innings giving up seven runs, only one of which were earned, striking out six and walking four.

On Tuesday afternoon the Wolverines traveled to Chattanooga, Tenn., and faced McMinn County at Lookouts Stadium.

Dade got off to a good start, scoring two runs in the first and adding single runs in the second and third to take a 4-0 lead.

McMinn had a big fourth inning, scoring four runs to tie the game 4-4.

The Wolverines exploded for seven runs in the bottom of the fourth to retake the lead 11-4 and then coasted to a 12-6 win.

Moore picked up the win pitching four innings allowing five hits and four runs, only one earned, and striking out seven. Eli Kimball and Landon Williams saw time on the mound as well.

Kimball and Braylon Sullivan had a pair of hits each while Wheeler scored three runs and Nethery had two RBIs. The Wolverines managed 10 hits in the game with eight players getting a hit.

On Thursday, the Wolverines traveled to Coosa for the final game of their three-game series.

Dade took the lead in the top of the first inning when Swader singled and scored on a hit by Wheeler to go up 1-0.

The Eagles came back in the bottom of the first, picking up two runs on three hits and an error to take a 2-1 lead.

Coosa added another run in the third inning on a pair of singles to go up 3-1.

In the top of the fourth inning the Wolverines cut the lead to 4-2 when they scored on a pair of errors and a single by Sullivan.

The bottom of the fourth the Eagles scored four runs, three of which came on a close call by the umpire that went in favor of the Eagles, as they took a 7-2 lead.

Dade managed base runners in the final three innings but could not get the big hit when they needed it and dropped the third game of the series by the final score of 7-2.

The Wolverines managed just four hits in the game with Swader, Wheeler, Nethery and Sullivan getting those hits.

The Wolverines will be at home on Tuesday afternoon in another Region 7-AA game against Fannin County starting a 5 p.m. DCHS will then travel to Fannin County on Friday for a double header with the first game starting at 5 p.m.