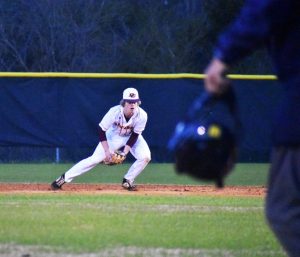 EDDY GIFFORD/Dade County Sentinel
Owen Dabbs fields the ball at second base in Friday game against the North Murray. The Wolverines will play at Coosa tomorrow and be at home again on Tuesday, March 22 as they host Fannin County. Game time is scheduled for 5 p.m.

The Dade County High School Wolverine baseball team traveled to their home away from home on Wednesday, March 9 to face North Murray. That home away from home is Edwards Park in Dalton where the Wolverines were playing their third game of the year there. The turf field gives them a chance to play when it is too wet at most non-turf fields.

Dade got off to a good start with a pair of hits in the first inning, the big hit came on a home run by Kayden Moore to put them on top 1-0.

In the bottom of the first errors cost the Wolverines as they gave up three runs, two of those unearned and fell behind 3-1.

In the top of the second Brayden Nethery and Braylon Sullivan singled and Nolan Heath walked before Brodie Swader doubled scoring three runs to put the Wolverines back on top 4-3.

North Murray tied the game at 4-4 in the bottom of the second on another unearned run.

DCHS took the lead in the top of the third scoring one run to go up 5-4 but North Murray came back in the bottom of the third to tie the game 5-5 on a solo home run.

The Wolverines had a big fourth inning scoring four runs on a pair of walks and doubles by Swader and Malachi Burch to take a 9-5 lead.

Dade added three more runs in the top of the fifth when Swader homered after an error and walk to increase their lead to 12-5.

On Thursday, DCHS traveled to Sonoraville Phoenix in another non-region game against a good AAA team.

The Wolverines were retired in order in the top of the first inning and Sonoraville loaded the bases in the bottom of the first on an error, hit batter and single with one out but Swader got a big strikeout and then a ground out to end the inning without giving up a run.

Dade got a pair of runners on in the top of the second but was unable to score and the Phoenix went down in order in the bottom of the second and the score remained 0-0 after two innings of play.
In the top of the third Heath singled and later scored on an error to give the Wolverines a 1-0 lead.

The lead did not last long as Sonoraville answered with a pair of hits and a run in the bottom of the third to tie the game 1-1.

The game settled into a real pitcher’s dual after that as neither team made a real threat to score until the top of the sixth inning. With one out Landon Williams was hit by a pitch, Nethery walked, and

Owen Dabbs reached on an error to load the bases. Heath then walked to score Williams and Nethery then scored on a sacrifice fly to put the Wolverines up 3-1.

Swader retired the Phoenix in order in the bottom of the sixth and the wheels ran off for the host in the top of the seventh as the Wolverines exploded for six runs on five hits and three errors to take the lead 9-1.

Swader gave up a hit and another runner reached on an error, but he ended the game with his 10th strikeout of the game and Dade claimed the big 9-1 win.

Swader was dominating on the mound pitching seven innings, giving up one run and five hits while striking out 10.

Zeke Wheeler had two hits and two RBIs while Heath also had a pair of hits for the Wolverines.

On Friday, the Wolverine were at home to face the North Murray Mountaineers for the second time in three days. This was their third game in three days, and they were looking for their fourth consecutive win.

The first inning was scoreless, and the Wolverines took a 2-0 lead in the second inning when Burch was hit by a pitch, stole second, moved to third on a Williams single and scored on a Nethery single. Williams then scored on a wild pitch.

The Mountaineers picked up a run in the top of the third and Dade answered on a Swader double and a Wheeler single to make it 3-1 after three innings.

After a scoreless fourth inning the Mountaineers came out swinging in the fifth inning, scoring four runs on four hits to take a 5-3 lead.

The Wolverines came back in the bottom of the fifth with three runs on hits by Heath, Swader, Moore and Williams to retake the lead 6-5.

In the top of the sixth North Murray tied the game without a hit, scoring on a walk, wild pitch, passed ball and a fielder’s choice.

In the bottom of the sixth Dade returned the favor scoring a run on a walk, wild pitch, and a fielder’s choice to take the lead 7-6.

The Wolverine’s Dwyer came in to pitch in the seventh and after a ground out and walk he struck out the last two Mountaineer hitters to end the game and picked up the save 7-6.

Swader and Williams had two hits each in the game.

This week the Wolverines began Region 7-AA play when they hosted the Coosa Eagles on Monday for a double header. Dade will travel to Coosa Thursday to complete the three game series.

On Tuesday, the Wolverines played at the Chattanooga Lookouts facility against McMinn County, Tenn.

Get out and support Wolverine as they are off to a 7-3 start heading into region play.