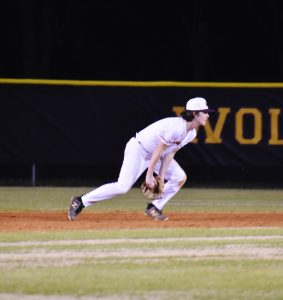 EDDY GIFFORD/Dade County Sentinel
Brodie Swader makes the play from shortstop in Friday’s game against the Ider Hornets. The Wolverines picked up the win 4-2. Dade Will be at home this Friday as they face North Mur

The Wolverines got off to a good start when Brodie Swader was hit by a pitch and with two outs Kayden Moore hit a home run to put DCHS on top 2-0.

The Wildcats picked up a run in the second on an error to cut the lead to 2-1.

DCHS added two more runs in the fifth inning without the benefit of a hit to take the lead up to 6-1.
Brayden Nethery held Ft. Payne in check until the sixth inning. A fielding error started the inning and things fell apart after that. A hit, walk, and hit batter produced a run. Two more runs ended Nethery’s day and Malachi Burch came on in relief.

Burch gave up three runs in two-thirds of an inning and when the final out of the inning was recorded Ft. Payne had scored eight runs in the inning to take the lead 9-6.

The Wolverines were retired in order in the top of the seventh and the Wildcats picked up the win 9-6.
Nethery pitched 5.1 innings giving up three earned runs on six hits and six strikeouts. Burch took the loss pitching two-thirds of an inning giving up one earned run on three hits and recorded one strikeout. Only four of Ft. Payne’s runs were earned.

Moore had a pair of hits including a home run with two RBI’s. Kimball also had two hits and four RBIs as the two accounted for all of the Wolverine hits.

On Friday, the Wolverines hosted the Ider Hornets in their second meeting last week. The first meeting was a 9-0 win for the Wolverines, and they were looking for the sweep.

The Wolverines picked up a pair of first inning runs on singles by Nolan Heath and Swader and a double by Burch.

Still leading 2-0 in the bottom of the fourth Landon Williams led off with a triple and scored on an error on a bunt by Nethery. After moving to third on a wild pitch Nethery scored on a sacrifice fly by Heath to put the Wolverines on top 4-0.

The Hornets got on the board in the sixth inning on two hits and an error for their first run of the game.

They would pick up another run in the top of the seventh on a double, moved to third on a ground out and scored on a wild pitch to make it 4-2. They were then retired and the Wolverines defeated them 4-2.

Heath also had two hits in the game scoring one and driving in one run. Swader, Moore, Burch and Williams also had hits for Dade.

This week DCHS will travel to Sonoraville on Thursday and host North Murray on Friday. Game times are set for 5:55 p.m.