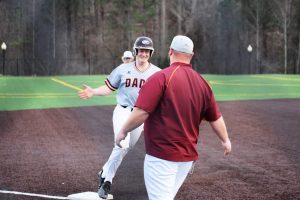 EDDY GIFFORD/Dade County Sentinel
Zeke Wheeler is congratulated by Coach Chris Brown as he rounds third base after slugging his second home run of the game last week against Trion.

The Dade County High School Wolverine baseball team managed to get in a pair of games last week in spite of the rain, but they had to travel to Dalton to do so. Wet conditions on their home field forced them to go to Edwards Park in Dalton to play the two home games on their turf field.

On Tuesday Dade hosted the Trion Bulldogs who jumped out to an early 1-0 led in the first inning.

They added a run in the second to go up 2-0 before Zeke Wheeler got the Wolverines on the board with a home run to make it a 2-1 game.

Trion added two runs in the third and fourth innings to go up 6-1 before Wheeler hit his second home run of the game in the fourth to cut the lead to 6-2.

After a scoreless fifth the Bulldogs scored a run in the sixth and the Wolverines managed one in the seventh. Trion came away with the 7–3 win, their second over Dade this season.

Wheeler led the Wolverines with two home runs, while Brodie Swader had a pair of hits.

On Friday, the Wolverines traveled back to Edwards Park to face the North Sand Mountain Bison.

The Wolverines got off to a good start scoring three runs in the bottom of the first inning to take the early lead and never looked back.

They added three more runs in the third and then ended the game in the fifth with five runs and the 11-0 win.

Brayden Nethery and Swader combined for a no-hitter with Nethery getting the win going four innings striking out nine and walking one. Swader pitched one inning recording three strikeouts. This was the Wolverines second no-hitter of the season.

Swader also led DCHS at the plate hitting two home runs and four runs batted in. Wheeler also had two hits and an RBI. Burch had a hit with two RBI’s and scored two runs.

The Wolverines improved to 2-2 on the season.

On Tuesday the Wolverines were scheduled to travel to Ider, Ala., and on Thursday they will travel to Fort Payne, Ala., before hosting the Ider Hornets on Friday, March 4 at 5:55 p.m.