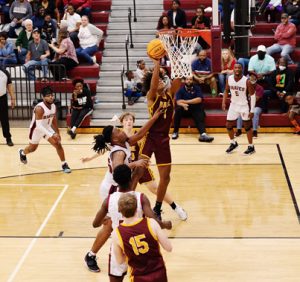 Photo courtesy of Rusty Cooper
David Cole soars to the net in last week’s first round game of the state tournaments against Heard County. Cole finished the night with 18 points and 16 rebounds.

The Dade County High School Wolverine basketball team traveled to Franklin on Tuesday, Feb. 22 for its first round state tournament game against the Heard County Braves.

Dade got off to a good start, out hustling the Braves in the first quarter and building a six-point lead, 21-15.

The Wolverines continued to outplay Heard in the second quarter on both ends of the court and by the end of the first half had build a nine-point lead, 39-30.

DCHS battled hard in the fourth quarter but was unable to overcome the third quarter mistakes as Heard held on to win 64-60.

The Wolverines had several chances to take the lead late in the game but did not get the bounces they needed as their shots just would not fall.

David Cole had a big night leading the Wolverines as he scored 18 points and grabbed 16 rebounds for a double double. Brodie Swader finished the night with 15 points and Max Howard had 14 points.

The Wolverines season came to an end, but they had a season to be proud of as they made the state tournament for the second year in a row after suffering through a number of bad seasons. Congratulations to Coach Mark Whitt and his staff.