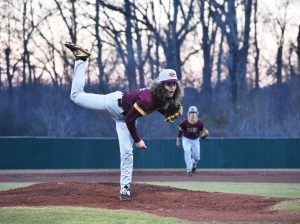 EDDY GIFFORD/Dade County Sentinel
Brayden Nethery threw his fist no-hitter against North Jackson last Friday. Nethery pitched the complete game striking out six batters. Due to weather this week, the Wolverines are scheduled to place Thursday and Friday at Edwards Park in Dalton.

The Wolverines would struggle at the plate and in the field, picking up only one hit while committing four errors in the game they lost 3-0. All three of the Bulldogs runs were unearned.

Eli Kimball picked up the Wolverines only hit.

Brandon Dover led the Bulldogs pitching five innings, giving up one hit and striking out ten to pick up the win.

On Friday, the Wolverines traveled to Stevenson, Ala., to face the North Jackson Chiefs.

The game got off to a slow start as the umpires were late and then after just three pitches the game was stopped for a “sun time out.”

The way the field sets and afternoon setting sun is directly at home plate. Add Mud Creek just past the center field fence and the reflection of the sun just adds to the problem.

So, an hour after the scheduled start only three pitches and one out had been recorded.

When play resumed the Wolverines managed a pair of walks but was unable to push a run across.

Nethery started his second game of the week and retired the Chiefs in order in the bottom of the first.

The Wolverines left one on in the second and the Chiefs managed an unearned run in the bottom of the second to take a 1-0 lead.

In the top of the third inning Nolan Heath walked, stole second and scored on a Zeke Wheeler single to tie the game 1-1.

Nethery got stronger as the game went on, retiring the Chiefs in order in the third and fourth innings.

It would remain tied until the top of the fifth when the Wolverines pushed across two runs to take a 3-1 lead. A double by Heath, errors and a sacrifice fly by Kaden Moore resulted in the two runs.

Dade added two runs in the sixth and two more in the seventh to take a 7-1 lead.

North Jackson managed a base runner in the fifth on a walk, their only base runner after the second inning. Nethery then retired the Chiefs in order in the sixth and seventh, ending the game on his sixth strike out of the game to complete a no hitter, his career first.

Nethery went seven innings throwing just 91 pitches, walking two and striking out six. He faced just 25 batters in the seven innings for a dominating performance and the Wolverines first win of the season.

This week the Wolverines are scheduled to face Ider on Tuesday at home. With rain in the forecast for most of the week the Thursday and Friday home games against Trion and North Sand Mountain have been moved to Edwards Park in Dalton. This is a turf field which should allow the game to be played that would have to be postponed due to wet conditions on the Wolverine field.

Edwards Park is located off Cleveland Highway in Dalton. The address is 115 Edwards Park, Dalton.