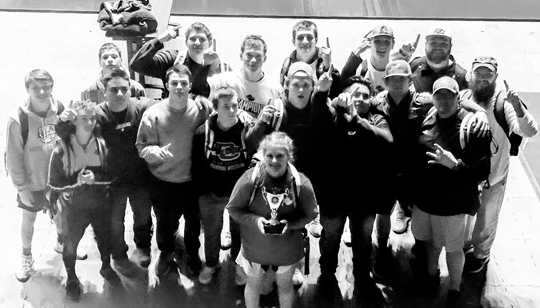 “You could not ask kids to give you more than Hayden, Issac, and Zac. After the state Duals ended the way, they did, Hayden was not sure he wanted to wrestle in the traditional. I had to push him a little. It was awesome to see his excitement when he won the match that guaranteed placement. I was proud of Isaac Pangle for pushing through pain to score as many points for us as he could. I did not even let him practice leading up to the tournament because he was so banged up. He gave everything he had for this team. Zac finished fourth last year, and he was hoping to finish higher this season, but he had one of the toughest brackets in the tournament. It was absolutely loaded with talent. He threw everything he had into that console finals match, but came up a little short,” coach Poston said.

Heidi Raines brought home the girls 152-pound championship. She won by fall in all four matches. Her finals match was against the defending 152-pound champion, and number four ranked female in the nation at that weight class. After giving up a take down early, Raines recovered to pin her opponent in the second period.

“On the way to the arena Saturday, Heidi told me she was going to stick her with a three-fourths Nelson. She said she used a cradle all day Friday to set Sullins up in the finals to be looking for cradle. To be there and see it come to fruition was pretty awesome,” coach Poston added.

Landon Williams won the 182-pound weight class. Landon was injured last week during the last practice before sectionals. His shoulder came out of place at practice. He was able to make it to the finals at sectionals, and then forfeited the finals match (his only loss of the season) to the 182-pound wrestler from Pepperell, Jake Roberts. Landon would face Roberts again in the state finals, and this time there was no holding back. Landon pinned Roberts to win his first state title as a high school wrestler.

“I was more nervous about Landon’s match than I was about any other match. Landon tweaked his shoulder again in the semi-finals, but he had a big enough lead to hold on and win. Jake is a tough kid, and I knew if Landon was one armed, he had a shot. It was such a relief to see the official award the fall,” coach Poston said.

Cody Williams became a two time state champion when he beat Tank Morris from Toombs County Saturday in the 195-pound finals. Cody has wrestled for a title all four years of his high school career, wining the last two. The match was close until Cody hit a reversal in the second period to put him on top, and in complete control of the match. It appeared Cody had Morris pinned at one point, but the official stopped the match for a blood timeout. Cody would ultimately win a decision, and immediately hit a back flip to celebrate.

“I’m going to be honest; I was never worried Cody would lose the match. He had wrestled Tank earlier in the year and won a close match 1-0. The thing is Cody was sick during that tournament so winning against that kid when he was sick was one of the most impressive things I have ever seen. I have watched Cody get robbed during his sophomore year, and I knew he would never let a match be determined by an official again. He will graduate as one of the best to wrestle for Dade County,” coach Poston said.

Austin Sorrelle went into his finals match giving up 45 pounds to a D1 football prospect from Lovett. Sorrelle weighed in at 215 pounds, and he was wrestling in the 285-pound weight class. Sorrelle was able to push the action early, but the first period ended with a score of 0-0. Sorrelle chose bottom in the second period, and quickly got an escape. The Lovett kid chose bottom in the third period and would earn his escape after about a minute. The score was tied 1-1, but then Sorrelle got a take down, and another takedown to put the match away with superior wrestling skills.

“Austin Sorrelle wanted to play basketball going into ninth grade. He was frustrated because he was in the same weight class with Cody and Isaac, and they had wrestled for a long time. I stayed on him, and he finally realized he belonged with us. This kid has done nothing but work. He is the strongest kid in the program. He wrestled with Cody every day in practice, which made him a good scrambler, and extremely talented kid in neutral. Heavy weight guys are not known for neutral, so we knew he would have an advantage. For him to beat the private school kid in the finals was perfect. It was blue collar verses white collar. It was the epitome of our program, and a great way to wrap up the tournament,” coach Poston said.

Dade County finished second in the team standings behind Lovett. This is the second runner up finish in the Traditional State Tournament in program history. The Wolverines also finished as state runner up in the State Dual tournament in 2021. This senior class has a lot to be proud of.

Congratulations to the Dade County High School wrestling team on a great season.