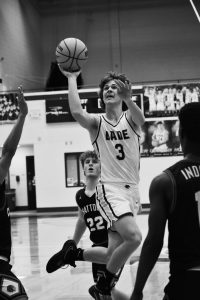 EDDY GIFFORD/Dade County Sentinel
Brodie Swader is surrounded by Chattooga Indians as he puts the ball up for two for the Wolverines. DCHS begins the first round of the region tournament this week at Fannin County.

The Dade County High School Wolverine basketball team traveled to Fannin County on Tuesday, Feb. 8 to face the Rebels in a key Region 7-AA game. It was also a good game to get use to the court that the region tournament will be played.

It was a real battle early as both teams came in looking for a win to help their region standing. The Wolverines managed a three-point lead at the end of the first quarter, 21-18.

The host Rebels fought back in the second quarter, outscoring Dade 19-11, and taking the lead at the end of the first half, 37-32.

It would be all Wolverines in the second half as they doubled up Fannin in the third quarter 14-7 to retake the lead, 46-44.

DCHS dominated the fourth quarter and came away with a big win on the road, 67-51.

The Wolverines were led by David Cole with 19 points followed by Everett Christiansen with 17, Max Howard with 14, and Brodie Swader with 11.

On Friday night the Wolverines hosted Chattooga County in a rematch of a game just seven days before that the Indians won, 98-87.

This game had all the indications of being another shoot out early as Dade took an early lead and was up by five at the end of the first quarter, 25-20.

The action slowed in the second quarter as the two teams stepped up the defense. The Wolverines managed to hold on to the lead even though the Indians outscored them 16-13, and at the end of the first half were up 38-36.

The lead went away in a hurry in the third quarter as Chattooga came out with a chip on their shoulder and outscored the Wolverines 24-15 to take a 60-53 lead heading into the fourth quarter.

It was all Indians in the fourth quarter as they ran away Dade ­– outscoring them 25-5 – and claimed an easy 85-58 win. Chattooga claimed the Region 7-AA regular season title with an 11-1 record.
Swader had a big night scoring 14 points while Howard and Everett Christiansen scored 10 points each.

The Region 7-AA Tournament gets underway this week at Fannin County High School. The Wolverines will play on Tuesday at 5:30 p.m., against Fannin County. A Wolverine win would put the team in the state tournament with an 8:30 p.m., game on Thursday against Chattooga County.

The top four teams from each region qualify for the state tournament with the top two seeds hosting first round game and the bottom two seeds traveling.

Good luck to the Wolverines as they seek a return trip to the State Tournament.