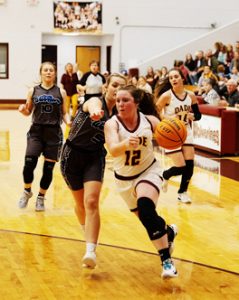 Photo courtesy of Rusty Cooper
Ali Thompson drives past defenders to the basket in last Friday’s game against Gordon Central.

The Lady Wolverine basketball team was back in action on Tuesday, Feb. 1 when they traveled to Coosa to face the Lady Eagles.

Dade got off to a good start against the struggling Lady Eagles, taking a 14-6 lead at the end of the first quarter.

In the second quarter the Lady Wolverines managed just 11 points but held the host team to just one point to lead at the end of the first half, 25-7.

Coosa matched their first half points in the third quarter, seven, but Dade added to their lead by scoring 10 and leading 35-14 heading into the fourth quarter.

The Lady Wolverines coasted to an easy win, outscoring the Lady Eagles 10 to nine in the fourth quarter and came away with an easy 45-23 win.

On Friday, the Lady Wolverines hosted the Gordon Central Lady Warriors, a team they had lost to earlier in the season.

If you like to see a high scoring game, you were in the wrong place Friday as both teams had a tough time putting points on the board. At the end of the first quarter the Lady Warriors had a one-point lead, 7-6.

The second quarter was more of the same with Gordon Central outscoring Dade seven to five to lead at the end of the first half, 14-11.

The 25 total points first half was the lowest I remember in a game that play was not intentionally slowed down.

Dade was able to improve their shooting in the second half, but Gordon Central continued to struggle. In the third quarter the Lady Wolverines outscored their own first half, scoring 13 points to take the lead, 25-18.

DCHS dominated the fourth quarter to come away with the win, 36-21. The Lady Wolverines shot 23.4 percent for the game while the Lady Warriors shot just 15.4 percent.

On Saturday afternoon the Lady Wolverines traveled to Summerville to face the Chattooga County Lady Indians. This game was rescheduled at least twice due to weather.

Dade’s shooting woes carried over from Friday night as they managed just one first quarter point.

The Lady Wolverines got on track in the second quarter when they scored 18 points but still trailed the Lady Indians 25-19.

The second half saw Dade again struggle to score, scoring nine in the third quarter and just five in the fourth, while Chattooga put up 13 and nine to claim the win 47-33.

It was a tough loss for the Lady Wolverines who are currently in second place in region and the loss eliminated any chance of overtaking first place Fannin County.

Henry led with 12 points while Ali Thompson finished the night with 11 points.

This is the final week of regular season play for the Lady Wolverines. The team traveled to Fannin County on Tuesday and will host Chattooga County on Friday night in the final home game of the year.

Get out and support the Lady Wolverine basketball team!