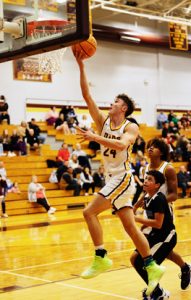 Photo courtesy of Rusty Cooper
Everett Christiansen takes the ball to the basket in last week’s game against Coosa.

DCHS got off to a good start as they jumped out to an early lead and by the end of the first quarter was up by nine, 24-15.

The pace slowed in the second quarter, but the Wolverines were still able to build on their lead and at the end of the first half was in control, 38-25.

Both teams came out firing in the second half and the Eagles managed to cut into Dade’s lead, outscoring them 24-20. Going into the fourth quarter the Wolverines were up 58-49.

Coosa tried to come from behind, but Dade held them off and came away with a big 67-62 win over a good Eagles team.

Brody Cooper led the Wolverines with 16 points followed by Levi Moreland with 13, Brodie Swader with 12 and David Cole with 11.

On Friday night the Wolverines hosted the Gordon Central Warriors in another region game. The Warriors came in with just three wins on the season.

Dade struggled early in this one only scoring 12 first quarter points but still managed to lead the Warriors 12-7.

The pace picked up some in the second quarter as the Wolverines put up 17 points while holding Gordon Central to just seven and led 29-14 at the end of the first half.

DCHS would put the game away in the third quarter when they put up 20 points while the struggling Warriors managed just five. The Wolverines headed into the fourth quarter up 49-19.

The fourth quarter was uneventful as both teams played a lot of players, and Dade came away with an easy 56-25 win.

Everett Christiansen led the Wolverines with 19 points while Cole and Swader scored eight points each.

On Saturday, the Wolverines traveled to Summerville to face the Chattooga County Indians in a big Region 7-AA game. The Indians are the top team in the region with a 9-1 record.

Dade County got off to a slow start while the Indians came out firing and at the end of the first quarter the host were on top 25-14.

The second quarter was wide open for both teams as the Wolverines were able to cut into Chattooga’s lead as they scored 29 points while the Indians scored 25 to hold a 50-43 lead at the end of the first half.
The hot shooting Chattooga team continued to burn the net in the third quarter as they put up 28 points to the Wolverines 19 to build their lead to 78-62 heading into the fourth quarter.

The Wolverines tried to rally from behind in the fourth quarter, outscoring Chattooga 25 to 20 but fell short as the Indians took the win, 98-87.

Max Howard led the Wolverines with 25 points followed by Swader with 20, Christiansen with 13 and Cooper with 12.

This week the Wolverines traveled to Fannin County on Tuesday and will then host Chattooga on Friday in the final regular season game of the year. The Region 7-AA tournament will start next week, probably at Fannin County. See next week’s Sentinel for game times.