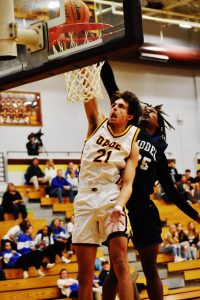 The Dade County High School Wolverine basketball team hit the court on Monday to start a busy week as they faced off against the Coosa Eagles in a game that was rescheduled a couple of times due to weather and COVID–19.

The game got off to a fast start but slowed midway through the quarter with the visiting Eagles taking a two-point lead at the end, 12-10.

DCHS got things going their way in the second quarter, dominating the much bigger Eagles, outscoring them 18-4 to take a 28-16 lead at the end of the first half.

The fourth quarter belonged to Dade as they kept the pressure on the Eagles who just could not stop the Wolverines from scoring as they came away with a 60-47 win over Coosa who dropped their second region game of the year.

David Cole led the Wolverines with 15 points followed by Everett Christiansen with 12 and Brody Cooper and Levi Moreland with 10 each.

On Tuesday the Wolverines traveled to Pepperell to face the Dragons. Just like on Monday night the game got off to a fast start as the two teams battled for control early. At the end of the first quarter Dade held a one-point lead over the Dragons, 15-14.

Pepperell battled back in the second quarter as the Wolverines struggled to score and at the end of the first half the Dragons were up 29-25.

Dade came out firing in the second half, as they have a lot this year, and dominated the host team outscoring them 18-6 to take the lead, 43-35.

The Wolverines continued to dominate play in the fourth quarter and came away with an easy 66-45 win over the Dragons.

Max Howard led the DCHS with 17 points followed by David Cole with 16, Brody Cooper with 12 and Everett Christiansen with 10.

On Friday, the Wolverines hosted Model’s Blue Devils in their third region game of the week. They were by far the biggest team Dade has faced this season.

The two teams got off to a fast start and at the end of the first quarter the Wolverines were up by two-points, 18-16.

The pace slowed in the second quarter, but DCHS fought hard and built their lead to four-points by the end of the first half, 31-27.

Defense would dominate the third quarter as Model played much better and outscored Dade 10-5 and take the lead, 37-36.

Model would dominate the fourth quarter as their size was to much for the Wolverines and they came away with a big region win, 58-49.

The Wolverines were led by Brody Swader with 14 points followed by David Cole with 11 and Brodie Cooper and Max Howard with eight each.