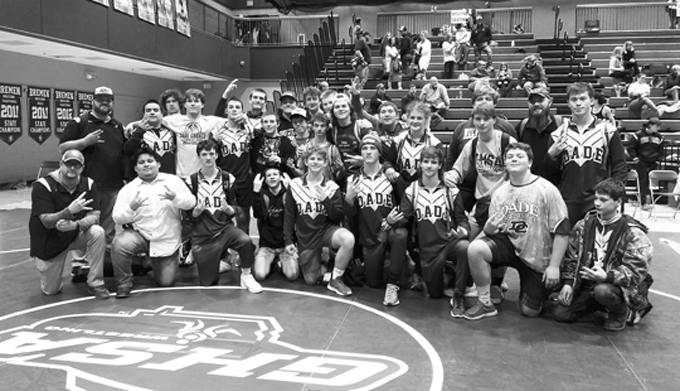 The Dade County Wolverines came up six points short on their bid for a state championship Saturday in Bremen. The Wolverines lost to Lovett in the semi-final round match–up.

Dade County opened the tournament with a quarter final round win over Haralson County 54-30. Dade was dominant in the match–up, and actually forfeited the final three matches of the dual after building a 54-12 lead over the Rebels.

The Wolverines started off in dominate fashion over Lovett as well, building a 27-6 lead through the upper weight classes, but Lovett would come roaring back in the lower weights.

Lovett would wind up winning eight of 14 weight classes, and they managed to earn just enough bonus points to hold off the Wolverines. One of the best matches came at 220 pounds when Cody Williams bumped up from 195 to take on highly ranked Christian Bell.

“Cody educated that young man about what wrestling really is. He had been able to muscle his way through the weight class so far this year, and he did not score a point against Cody. Cody finally broke him in the second period, and pinned him,” coach Jeff Poston said.

Even with the domination at the top of the weights, Lovett just had too many weapons at the bottom, so DCHS moved into the consolation portion of the bracket to face the winner of Pepperell and Lamar County.

Dade would face a familiar opponent in the match for third and fourth, although they had not squared off in wrestling before Saturday, Fannin County and Dade have battled in every other sport. The match–up turned out to be a battle, and the Wolverines would ultimately come out on top.

Gideon Moore got the excitement started by upsetting the 113–pounder from Fannin County and sticking him in the first period with four seconds remaining on the clock.

The Wolverines fed off the energy, and senior Jake Gatlin gave the performance of his life in the 120-pound match. Gatlin had injured his knee in the sectional round of state the previous week and had to have fluid drained just to be able to move his leg. It looked like he would have to injury default out of the match at one point, but he refused to allow that to happen. He battled his way to a 17-11 victory and gave Dade a cushion heading down the stretch. Fannin would win at 126, 132, and 138 cutting the lead to 30-24.

The 145-pound match would also be exciting as Heidi Raines battled to an overtime victory over, Cantrell from Fannin. She won with a take down in the first overtime period 12-10. The lead was then 33-24 with three matches left. Cayden Cooper sealed the deal at 152 by dominating his opponent with a second period pin and putting the match out of reach. The final score would wind up being 39-33 as Dade finished third.

“I am 100 percent certain that if we’re healthy, we are state champions. I knew last week when Jake got hurt, we would have to flip a match somewhere else to beat Lovett. I feel for our kids, but I am in awe of the fight they showed. It was obvious we were better than Oglethorpe County, and to be honest, so was Fannin County, but we cannot control the way the bracket was set, and we cannot control calls, and we cannot control injuries. The one thing we could control was our effort, and man these kids represented our school and our county in first class fashion. These seniors have finished fourth, fifth, second, and third at State Duals, and they also have three top 10 finishes at traditional state. I don’t know if there has been a better group come through, and I love them with all my heart,” coach Poston said.

The Wolverines will begin the individual portion of the season this Saturday at Chattooga. The top four players in each weight class move on to sectionals the following week at Lake Point in Cartersville. The top six players at sectionals will compete for an individual state championship in Macon beginning Feb. 11th.