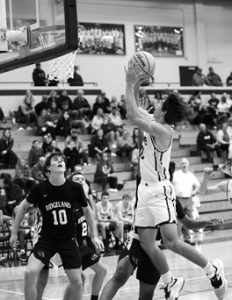 Photo courtesy of Rusty Cooper
Brody Cooper puts the ball up for two during Friday’s contest with Ridgeland. Cooper finished the night with 11 points.

On Friday night the Ridgeland Panthers came calling and the home crowd saw a competitive game between the two teams.

The Panthers battled hard in the second quarter, but Dade still held the lead at the end of the first half, 27-23.

Ridgeland, and heading into the fourth quarter were up 40-31.

Early in the fourth quarter the Panthers cut into Dade’s lead, but it was short lived. The Wolverines got hot down the stretch and pulled out a convincing 11 point win, 58-47.
Max Howard led all scorers with 18 points followed by David Cole with 12 and Brody Cooper with 11.

This week the Wolverines played the Coosa Eagles on Monday, visited Pepperell’s Dragons on Tuesday. DCHS will host Model on Friday. All three games are important Region 7-AA games.

A date for the Chattooga game had not been set as of press time.