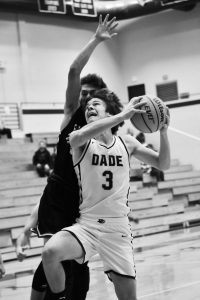 The Dade County High School Wolverine basketball team traveled to Calhoun on Tuesday, Jan. 11 to face off against the Gordon Central Warriors.

The first quarter was very competitive as the two teams struggled shooting the ball, but the Wolverines came out on top at the end of the quarter leading 11-7.

In the second quarter Dade exploded for 30 points while the Warriors continued to struggle and scored only 10 points. The Wolverines took a commanding 24 point lead into the locker room at the end of the first half, 41-17.

The hot shooting continued for Dade in the third quarter as they rang up 23 points while Gordon Central continued to struggle, only scoring seven. Heading into the fourth quarter the Wolverines’ lead had grown to 40 points, 64-24.

With the mercy rule in place the fourth quarter had a running clock as Dade came away with an easy 72-36 Region 7-AA win over a Warrior team that has managed just three wins all season.

Brody Cooper led the Wolverines with 18 points. David Cole was close behind with 16 and Max Howard finished with 12 points.

On Friday night the Wolverines hosted the Rebels of Fannin County in another Region 7-AA game. The large crowd got their money’s worth as the two teams battled toe-to-toe for four quarters.

The first quarter set the tone for the game as the two teams swapped baskets with neither team ever able to pull away and at the end of the first quarter the visiting Rebels held a one-point lead, 18-17.

Defense dominated the second quarter as the lead changed hands several times but at the end of the first half the Wolverines had taken a one-point lead, 28-27.

The third quarter was a lot faster paced than the first two and the Rebels managed their biggest lead of the game, five points. Dade finished strong but heading into the fourth quarter the Rebels led 49-45.

The fourth quarter was back and forth as the two teams continued their toe-to-toe battle and with 4.1 seconds remaining in the game the Wolverines tied the game on a Brodie Swader jumper, 62-62.

Everyone in the gym was ready for overtime but the Rebels had a different idea as they took the inbound pass and raced down the court and hit a difficult shot as time expired to claim the win 64-62. It was a disappointing loss for the Wolverines

David Cole led the team with 15 points followed by Brodie Swader with 13, and Brody Cooper with 12.

This week the Wolverines will travel to Chattooga who leads the region on Tuesday and then host North Sand Mountain on Wednesday with the boys tipping off at 7:30 p.m. On Friday night Dade will host Ridgeland with JV games starting at 4 p.m., and 5:30 p.m. and varsity games beginning at 7 p.m., and 8:30 p.m.