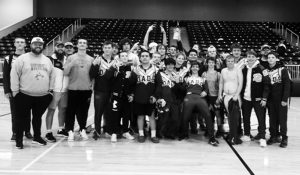 The Dade County High School Wolverines have earned the Area Duals Championship title for the second year in a row.

The Dade County Wolverines rolled through Area Duals this past Saturday at Chattooga to win their second Area Championship in a row.

Dade opened up the 7AA Championships with an 81-0 win over Gordon Central in the first round. The Wolverines would take on Chattooga in the second round, and would come away with a 54-18 win. The Wolverines beat Model 47-28 in round three, and then faced Pepperell in round four where they would come away with a 72-10 victory. With the championship wrapped up, Dade faced Coosa in the final round of the Duals and marched to a decisive 60-15 win in round five.

“I felt like we woke up over the last week or so. Fort Payne meet is exactly what we needed in a big slap in the face. The kids were determined to not let that happen again this week. I am extremely proud of our kids winning this thing two years in a row. I am not sure that has ever been done before, at least not in the Duals. We get to host the first round of state for the second year in a row as well, so this group has a lot to be proud of,” Coach Jeff Poston said.

The winners will then face off against each other with the winner advancing to the Class AA Team Dual Wrestling State Championship at Bremen High School on Saturday, Jan. 22nd.

Get out and support the Wolverines and fill the gym again on Saturday for the Dual Wrestling Sectional!