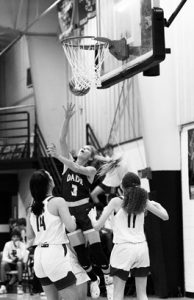 Photo courtesy of Rusty Cooper
Stella Henry puts the ball to the basket for the Lady Wolverines in recent action. Henry was the leading scorer for the team against North Sand Mountain last Saturday.

These two teams have had some classic battles over the years and those who traveled to Model experienced another one of those games.

Dade doubled up the Lady Blue Devils in the first quarter 12-6 but after that it was a typical game between these two teams.

In the second quarter the two teams swapped baskets and played good defense and at the end of the first half the Lady Wolverines held on to their early six-point lead, 27-21.

In the second half both teams played hard on defense and made scoring difficult. Just 24 total points were scored in the third quarter and heading into the final eight minutes DCHS held on to their six-point lead, 39-33.

Model tried to rally in the fourth quarter, but the Lady Wolverines fought them off and came away with a big Region 7-AA win, 49-45.

Saturday, Jan. 8, the Lady Wolverines traveled to North Sand Mountain to face the Lady Bison in a non-region game.

Dade would make quick work of the Lady Bison as they jumped out to an early lead and by the end of the first quarter were up 17-5.

NSM struggled to stay with the Lady Wolverines in the first half and trailed 27-12 after two quarters of play.

The Lady Bison played much better in the second half, outscoring the Lady Wolverines 12-11 in the third quarter to trail 38-24 heading into the final eight minutes.

The Lady Wolverines, playing everyone, held NSM at bay and came away with the win, 63-41.
Dade was led by Henry with 15 points followed by Heard with 13 points and Thompson with 11 points.

The Lady Bison were led by Kolbi Bobo with 11 points and Kayden Reyes with eight points.

The Lady Wolverines faced the Lady Ramblers of LaFayette in their final game of the Gordon Lee Tournament on Dec. 30 and those final statistics were not available at press time last week.

It turned out to be a disappointing loss for the Lady Wolverines who saw a seven point third quarter lead go away in the fourth quarter and suffer a 47-46 loss to the Lady Ramblers.

This week the Lady Wolverines faced Gordon Central on Tuesday and be at home on Friday against Fannin County and will host North Sand Mountain on Saturday. Friday and Saturday games will start at 6 p.m.