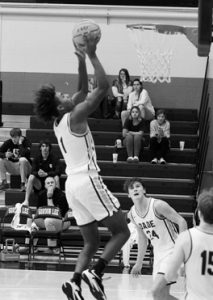 Photo contributed by Rusty Cooper
David Cole goes up for a basket in last week’s tournament at Gordon Lee. Cole led the Wolverines with 24 points in their game against Trion on Dec. 29.

The Christmas break seemed to have an effect on both teams as they struggled to score and at the end of the first half Heritage still held a one-point lead, 23-22.

The second half proved to be more of the same as the evenly matched teams, still struggling to find their shooting range, kept it close and the Generals led 34-32 at the end of three quarters.

In the fourth quarter the shooting picked up with Heritage managing 20 points and pulling out a hard-fought victory over the Wolverines, 54-48.

On Wednesday, Dec. 29 the Wolverines faced the Trion Bulldogs in the second tournament game and the hot shooting returned as they put up 20 first quarter points while the Bulldogs managed just three to take a big early lead, 20-3.

The second quarter was more of the same as Dade put up 22 points while the Bulldogs managed just six and the Wolverine lead grew to 42-9 at the end of the first half.

The Wolverines blistered the nets for 26 points in the third quarter and their lead grew to 69-15 at the end of three quarters.

In the fourth quarter Dade slowed it down and came away with a big 79-20 win over the Bulldogs.

On Thursday, Dec. 30 the Wolverines faced Chattanooga Central in their final game of the tournament.

The Wolverines got off to a good start, taking a four-point lead at the end of the first quarter, 17-13.

Central battled back in the second quarter and when the first half ended, they held a one-point lead over the Wolverines, 30-29.

Play slowed down in the second half when both teams struggled to score in the third quarter managing just 10 points each and Central managed to hold their one-point lead, 40-39.

The fourth quarter continued to be a close battle but unfortunately Dade came up a little short and fell to Central 56-53.

This week the Wolverines faced Model on Tuesday and will host Coosa on Friday in a pair of Region 7-AA games. On Saturday, the Wolverines will travel to North Sand Mountain. Game time for Saturday’s game is 6:30 p.m.